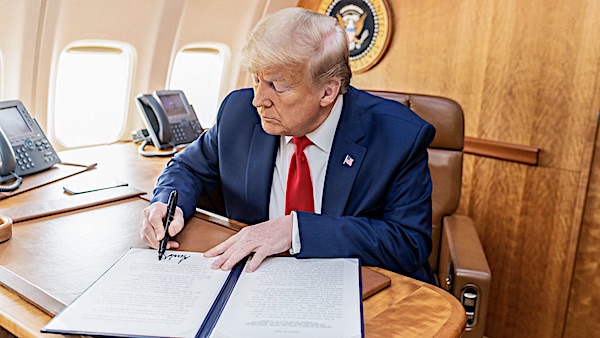 Staffers started making the mountain in the morning, printing and stacking page after inky page of Xeroxed sheets at the White House. By the afternoon, when President Trump arrived, the summit of paper easily towered over the 6-foot-3 executive that day in 2017.

More than 185,000 pages of federal regulations, five pillars wide and three columns high, were neatly stacked in the Roosevelt Room. Trump, still somewhat new on the job, motioned to the mountain and promised to unleash an administrative shredder on each “unnecessary page."

The president had called reporters in to brag about his executive order, the one that had required cutting more old regulations before adding new. “We aimed for two for one,” he beamed. “We hit 22 for one.” His administration was shredding so much so fast in the first year of his term that Trump wondered “if we will have anything left to cut.”

But there is more left, three years later. A lot more, senior White House staffers tell RealClearPolitics, and, during a pandemic, Trump is having a deregulatory moment. As coronavirus burns its way around the globe, Trump has been shoveling the federal register into the fire one page at a time. The president announced another executive order Tuesday, this one to make permanent the regulatory rollbacks already ordered in response to COVID-19.

More will inevitably be torched. It is in his nature.

In his real estate days, Trump chafed so much under zoning laws and environmental laws and labor laws that he endorsed Mitt Romney for president. Writing in the Washington Times in 2012, Trump explained that his support was, in part, because Obama-era red tape was “a stealth tax” that strangled the economy. Four years later when he ran for president, Trump promised to end those regulations. Most notably, the Paris Climate Accord. After getting elected, he went on a deregulatory tear.

“When the president has a chance to do something on his own directly through executive order, not partnering with Congress, what does he do? His instincts tell him to go back to what has worked in the past,” explained Anthony Campau, Trump’s former chief of staff at the Office of Information and Regulatory Affairs.

The old playbook, Campau, now a scholar at the conservative Heritage Foundation, told RealClearPolitics, means “reducing regulatory burdens so the market can flourish. There is every reason in the world to believe that will work and think that's the right move. It's worked for him already.”

According to White House numbers, shredding red tape during his first three years and before the pandemic cut regulatory costs by $50 billion. They estimate that once those rules are fully implemented, they will amount to nearly $220 billion in savings. More lies on the horizon. Combined with tax cuts, this is the sort of thing that thrills the GOP base. It has been conservative orthodoxy since at least the Reagan administration to curse the heavy hand of regulators and condemn administrative agencies for hamstringing markets. In this way, the president has all but grabbed a giant pair of scissors and wrapped himself in the Gadsden flag of the last Tea Party.

Trump has certainly primed the pump to flood the economy with no less than $2 trillion in relief aid. In this way, he appears a necessitous Keynesian. But Trump has also rescinded federal authority in the middle of a crisis. In that way, he looks more like an emerging Randian. Historical comparisons naturally follow.

“From antiquity to the present day, emergencies have been used by those in authority to expand their power, too often at the expense of the liberty of the people,” said Paul Ray, the OIRA administrator.

“The unique thing about this president is that his approach is fundamentally different than the way Washington thinks,” Russ Vought, the acting director of the Office of Management and Budget and the one holding the knife, told RCP. “He understands that in order for Americans to get back to work and ultimately have more freedom to live their lives, deregulation is key. It’s the American people, small businesses, churches, and communities who will jumpstart the Great American comeback — not the government.”

This won’t spare Trump from critics who argue that his handling of the current crisis has been subpar. Why weren’t there enough coronavirus tests? More personal protective equipment? Ventilators? But Tyler Cowen, chair of the economics department at George Mason University, argues that the real problem isn’t so much presidential management as it is that “our regulatory state is failing us.”

The early days of the pandemic were punctuated with ugly headlines about administrative agencies standing in the way. The Food and Drug Administration shut down sales of home testing kits. The Centers for Disease Control stopped researchers from tracking the initial spread of the disease because they lacked proper certification. The National Institute for Occupational Safety and Health created bottlenecks for medical manufacturers trying to hurry the production of N95 masks.

Those missteps worry Philip Wallach, a researcher at the conservative R Street Institute who told RCP that the “administration’s deregulation rhetoric has sometimes outrun its actual achievements.”

The problem, conservatives will say, precedes the current president and runs back to the days when a professor at Princeton University was arguing for more centralized government to handle the demands of a modernizing world. Wallach, formerly of the liberal Brookings Institute, notes that bureaucracies spent decades “building up layers of regulations.”

“Making significant progress in clearing them away is hard work,” he told RCP, “and while the administration has made some good progress in recent months, there is still much more to be done.”

The White House insists the president hasn’t lost sight of the regulatory mountain though. A senior administration aide told RCP that the executive branch had directed federal agencies to look at 600 deregulatory actions, with more expected daily.

The FDA axed regulations to allow manufacturers to make modifications to ventilators without waiting for a time-consuming federal review. The FDA also changed regulations to let states forge ahead with testing and test development.

Health and Human Services gave the green light to telehealth options allowing doctors and nurses to see patients remotely through video chats. They also waived regulations that barred medical professionals from operating across state lines without a license.

The Department of Transportation has relaxed rules on how many hours a truck driver hauling medical supplies can log, while the Federal Aviation Administration will now allow flying drones to airdrop medical cargo in some states. Regulations governing everything from drug research to how many ounces of hand sanitizer passengers can carry on a plane have found their end on a federal chopping block.

The deregulatory moment is not expected to be fleeting, either. Adam White of the conservative American Enterprise Institute says that the latest executive order is a deregulatory two-step which makes immediate and long strides toward levelling the federal registrar.

“First, it focuses significantly on the opportunities for quick but temporary regulatory relief through recalibration of agency enforcement discretion,” he told RCP. “Second, and more subtly, this executive order is effectively creating pilot projects for some long-standing regulatory reform proposals.”

This notably includes directing so-called independent agencies, usually excluded from executive orders, to examine the rules on their books and report back to the president. It’s a small tweak but one with massive implications for the administrative state. “That's a significant step forward for those who believe there ought to be more presidential supervision and control of the regulatory functions of the historically independent agencies,” Campau explained.

All of it puts meat on the bones of the administration’s historical boast. The president isn’t letting a crisis go to waste, supporters say, arguing he’s using the opportunity to rescind power rather than accumulate it. He said as much Tuesday as he pushed his administration to loosen even more regulations to hurry both the medical and economic recovery.

“I just want you to go to town and do it right. Do it proper,” Trump told his cabinet before signing the executive order. “Make sure everything is safe and make sure it’s environmentally good,” he added, “for those of you that are in that category, but it’s very, very important.”

“So, good luck. And I’m signing this,” he said while no doubt eyeing that mountain of printing paper. “It gives you tremendous power to cut regulations.”