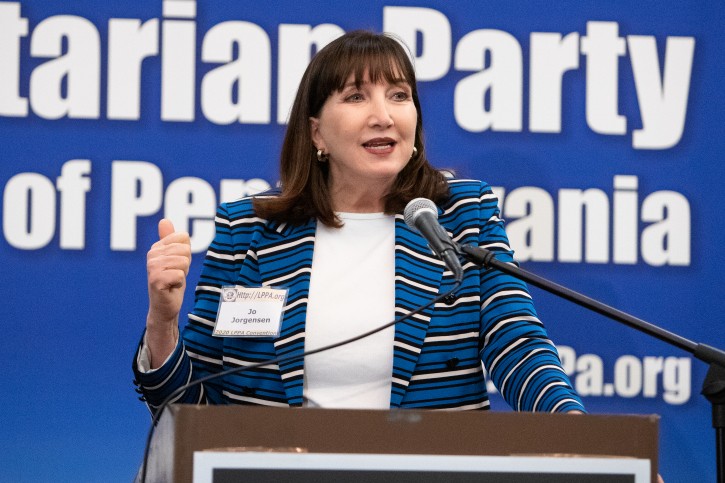 We have a choice!

Next presidential election, we don't have to decide between two big-spending candidates, neither of whom has expressed much interest in limited government.

OK, I won't delude myself – a Libertarian is unlikely to become president. But Jorgensen's platform is a refreshing change.

She correctly points out that government "is too big, too bossy, too nosy and way too intrusive."

Of course, many candidates say that when running for office.

President Donald Trump said it, but once he was elected, he increased spending by half a trillion dollars, created a new military branch designed to protect U.S. interests in space, imposed tariffs and demanded more funds for "infrastructure" and "building a giant wall."

By contrast, Jorgensen says government should do less and spend less.

She's right. The founders' insistence on limited government is what made America prosperous.

Jorgensen noticed how our big and cumbersome government slowed our response to the coronavirus.

"We had about 60 American companies making testing kits, and the FDA only approved two," she said in the final Libertarian Party debate. "What the president should have done was use the Emergency Powers Act and say, 'FDA, you only have to prove safety, not efficacy. Get these kits out there.'"

If some tests don't work, the free market will weed that out, says Jorgensen. "If you are a large drug company, you don't want to put out a drug or testing kit that doesn't work – you'll go bankrupt."

Trump supported the latest multitrillion-dollar stimulus bill, saying, it "will deliver urgently needed relief to our nation's families and workers." Biden called for another stimulus – "a hell of a lot bigger."

Jorgensen wouldn't sign either bill. "Let the people keep their money," she says. "Let them decide who should stay in business and who shouldn't."

She points out that government is not as good as individuals at deciding where money should go. "Government money usually goes to their friends and special interests and lobbyists."

America's most popular government program is probably Social Security. Created to help the minority of Americans who lived past age 65 at that time, it's now an unsustainable handout to most older people. Social Security is going broke because people my age just keep living longer. Sorry. We won't volunteer to die.

Jorgensen would save Social Security by offering everyone "an immediate opt-out," something like the Cato Institute's 6.2% solution, which would let individuals invest 6.2% of their payroll tax into a private retirement account.

While phasing the program out, she says seniors would be paid back what they've put in. "Sell those government assets, mineral rights, water rights, buildings downtown," she says. "Give that money to seniors."

Finally, Jorgensen would end "these needless wars that caused the injuries or deaths of hundreds of thousands of American soldiers … and the waste of trillions of tax dollars." She'd "make America one giant Switzerland, armed and neutral … no American military personnel stationed in foreign countries. No foreign aid. No loan guarantees."

This is not pacificism, she says. "I am proposing an American military force ready and able to defend the continental United States, Alaska, Hawaii and all U.S. territories against foreign attackers."

But like most libertarians, she doesn't want America involved in foreign wars.

As the Libertarian Party's presidential candidate, Dr. Jorgensen will be on the ballot in most states. Voters will have a real choice this November.

Libertarian ideas are very different from those held by today's Democrats and Republicans. Instead of lusting for more money and power, her party proposes a government that keeps the peace and, mostly, leaves people alone.

Sounds good to me.

John Stossel
John Stossel is author of "Give Me a Break: How I Exposed Hucksters, Cheats, and Scam Artists and Became the Scourge of the Liberal Media." To find out more about John Stossel, visit the Creators Syndicate webpage.
Placing deadly faith in 'the models'
We must speak up against the New Totalitarians
Reduce cop/citizen conflict: End the drug war
The new censors were trained by 'woke' professors
Bad cops – bad unions
See more...