With Memorial Day weekend coming up, I wanted to share another great story of American love, sacrifice and heroism.

Five months ago, if someone were to ask a neighbor if he had a spare face mask, you might think someone was doing some painting or yard work. Wow, how a virus can change our most basic perceptions.

Now, face masks have the value of a life preserver. They are also a symbol for countless heroic first responders and medical workers. But before those courageous souls was "the man in the red bandana."

Have you ever been to the 9/11 museum in New York City? During its temporary closure because of COVID-19, you can still digitally explore and learn from the contents of the museum from the comfort of your own home, including the exhibit "Remembering the 'man in the red bandana.'" Maybe this pre-Memorial Day week would be a good time to cruise its digital treasuries with loved ones.

Author and former business CEO Jack Alexander, now chairman at The Reimagine Group (thereimaginegroup.com), recently wrote a great book titled, "The God Impulse: The Power of Mercy in an Unmerciful World." In it, he shares the story of "the man in the red bandana."

The bandana served as the face mask for Welles Crowther, an American equities trader and volunteer firefighter who died helping save as many as 18 lives at the World Trade Center on Sept. 11, 2001. According to eyewitness accounts, that's what Welles was wearing around his nose and mouth as he calmly organized and led rescue efforts in the South Tower. 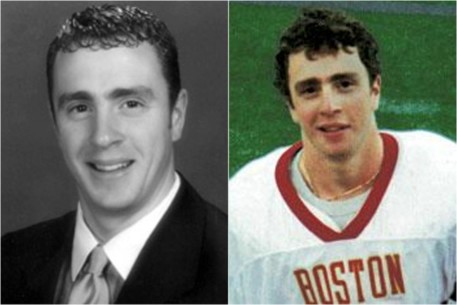 One day before church when he was 6 years old, Welles asked if he could have a handkerchief like the one his father had, a white pocket square in his coat pocket.

So, as Jack Alexander explained in his book,

His father gave [a red one] to him, explaining the clean white handkerchief in a breast pocket was "for show," the red bandana was "for blow."

Welles took that red bandana everywhere. When he volunteered with the Empire Hook and Ladder Company at age 16 – joining his father on the force – he carried it with him. When he played lacrosse for Boston College, [a school rooted in the passionate Jesuit tradition,] he tied it around his head and wore it under his helmet. Even when he took a job as an equities trader, working on the 104th floor of the World Trade Center's South Tower, he brought it with him.

In a culture of starched white handkerchiefs folded neatly in Italian-suit breast pockets, Welles kept his bandana close. And it was with him on Sept. 11, 2001, when United Airlines Flight 175 exploded into the South Tower, cutting a fatal swath between floors 78 and 85.

The 9/11 Memorial & Museum website picked up the story from there:

When hijacked Flight 175 hit the World Trade Center's South Tower, people on the 78th floor sky lobby huddled together, frightened and confused. There was no escape as far as they could tell. Then, a man with a red bandana covering his nose and mouth suddenly appeared from the wreckage and smoke. He spoke in a calm voice and guided them to a stairway, leading them to safety. The man in the red bandana made three trips to the sky lobby, saving as many people as he could, until the burning building collapsed.

A few months after 9/11, stories from survivors surfaced about the mysterious man wearing the red bandana. When Alison Crowther read an article about the hero in the New York Times, she knew that man was her son.

Several floors below Welles, Lin Yung was blown back by the explosion and couldn't see anything at first because her eyeglasses were covered in blood. When she wiped them off, Lin saw a world of nightmare: mangled bodies strewn around her, dust and debris everywhere. Lin didn't know how long her luck would hold.

Then she saw a young man through the smoke and ash, seemingly more shadow than flesh. He said, "I found the stairs. Follow me." Welles led Lin and others down 17 flights of stairs to where firefighters led survivors down another 20 floors to a set of still-working elevators. But Welles didn't follow them. Instead, he went back up, a red bandana wrapped around his nose and mouth.

He found Judy Wein in the rubble – her arm was broken, ribs cracked. One of her lungs was punctured. Welles called out: "Everyone who can stand, stand now. If you can help others, do so." Welles led Judy down the stairs, again to a band of waiting firefighters. And then he went back up. Again.

Welles didn't make it out of the South Tower. Perhaps he never expected to.

Lin keeps a photo of Welles in her apartment. She says, "Without him, I wouldn't be here. He saved my life. And he will always be in my heart. Always be with me."

During his May 15, 2014, dedication of the 9/11 museum, former President Barack Obama said of Crowther: "They didn't know his name. They didn't know where he came from. But they knew their lives had been saved by the man in the red bandana. He called for fire extinguishers to fight back the flames. He tended to the wounded. He led those survivors down the stairs to safety, and carried a woman on his shoulders down 17 flights. Then he went back. Back up all those flights. Then back down again, bringing more wounded to safety. Until that moment when the tower fell."

A red bandana of Welles was donated by his family and is displayed in the 9/11 museum. You can see a photo of it here. Like with the masks of many medical personnel today who fight to save others in this COVID-19 war, Welles red "face mask" has become a symbol of his heroism and self-sacrifice.

In fact, a 27-page children's book about Welles' life and sacrifice, "The Man in the Red Bandanna," was written and published by his sister, Honor Crowther Fagan, and illustrated by his uncle, John Crowther. It's available for purchase through the 9/11 Memorial & Museum store website. Please order a copy to help your kids or grandkids understand what it means to be loving and compassionate – what it truly means to be an American. (I also encourage everyone to watch the 13-minute ESPN tribute to Welles and all our fallen warriors, "The Man with the Red Bandana.")

As his mother Allison shared, she was certain that her son's bandana "was like his connection to his father. I'm sure he was feeling a piece of his dad with him there in that moment." 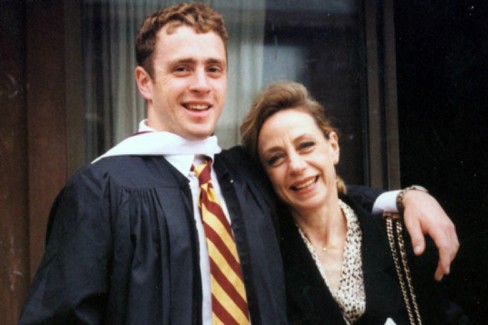 Welles and his mother, Allison

Indeed, he was. And in 2019, father and hero son were finally reunited in Heaven, when Jefferson Crowther fought his "final fire" with prostate cancer. 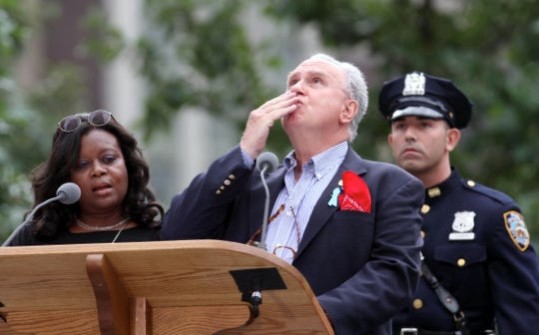 Wearing a red handkerchief in his pocket, Jefferson Crowther blows a kiss to his son Welles after reading his name during the 10th anniversary ceremony at Ground Zero Sept. 11, 2011. (Photo: Seth Harrison/The Journal News)

It is worthy to note that Welles' body was found six months after the World Trade Center collapsed, surrounded by the bodies of uniformed firefighters. He was only 24 years young when he gave up his life.

As 9/11 survivor Judy Wein explained, "People can live 100 years and not have the compassion, the wherewithal to do what he did."

Welles remains a quintessential example of American compassion, caring and a courageous spirit. Even more, he's an example of the words of Jesus, "No greater love is there than this: that one lays down his life for others."

All gave some. Some gave all. 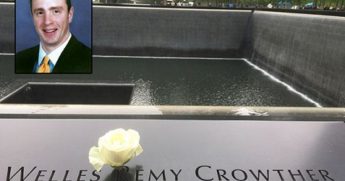