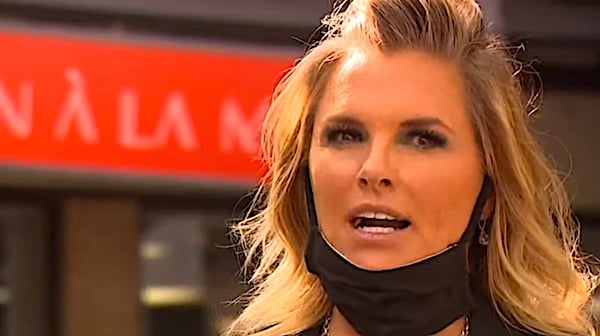 Reacting to a judge's jailing of a Dallas salon owner who refused to close her shop, Texas Gov. Greg Abbott modified his coronavirus exective order Thursday, eliminating confinement as a possible punishment.

After the governor's announcement, the state Supreme Court ordered Shelley Luther released. She left the jail complex within a few hours.

Luther was serving a seven-day jail sentence for reopening her business nearly two weeks ago in violation of Abbott's stay-at-home order. She publicly tore up a cease-and-desist letter ordering her to close.

But Abbott modified his order, making the elimination of confinement as a punishment retroactive to April 2. His press release named Luther.

"Throwing Texans in jail who have had their businesses shut down through no fault of their own is nonsensical, and I will not allow it to happen," Abbott said. "That is why I am modifying my executive orders to ensure confinement is not a punishment for violating an order."

Luther explained she and her employees needed to earn income to pay for food for their children.

Moye ordered her to apologize and admit she was wrong. When she wouldn't, he jailed her.

His actions drew condemnation from Abbott as well as the state's attorney general, Ken Paxton.

"That is why I am modifying my executive orders to ensure confinement is not a punishment for violating an order. This order is retroactive to April 2nd, supersedes local orders and if correctly applied should free Shelley Luther," Abbott said.

Paxton had described Moye's actions as a "publicity stunt."

Abbott said the order modification "may also ensure that other Texans like Ana Isabel Castro-Garcia and Brenda Stephanie Mata who were arrested in Laredo, should not be subject to confinement. As some county judges advocate for releasing hardened criminals from jail to prevent the spread of COVID-19, it is absurd to have these business owners take their place."

The report noted that some counties are releasing criminals.

Paxton earlier told Moye in a letter he abused his discretion when he "unjustly jailed" Luther.

"Locking her up is a misguided abuse of power, especially considering Dallas County released real criminals to 'protect them from COVID-19,'" he wrote.

"Release her now so she can return to her family."

In his letter, Paxton said that as "a small business owner, she wanted to help her employees feed their children."

"Needless to say, these are laudable goals that warrant the exercise of enforcement discretion," the attorney general said.

The judge had given Luther a choice: to apologize for selfishness, pay a fine and shut down until Friday, or serve jail time.

Her response was clear: "I have to disagree with you, sir, when you say that I'm selfish because feeding my kids is not selfish," Luther told the judge. "I have hairstylists that are going hungry because they would rather feed their kids. So sir, if you think the law is more important than kids getting fed, then please go ahead with your decision. But I am not going to shut the salon."

On his show Wednesday, talk-radio host Rush Limbaugh spotlighted the story as an example of "authoritarians" demanding more control of others' lives in response to the coronavirus pandemic.

He warned that such actions are creating a "tinderbox."

A GoFundMe campaign has been launched on Luther's behalf, with some $500,000 already donated.

That site says she "decided to resist tyranny by opening her business against an unlawful state executive order. Her business, SALON A LA MODE offers services for hair and nails, microblading, permanent makeup, professional event makeup, braiding and more!"

Limbaugh said she was doing what a good American should do in times of crisis: solve a problem.

He summarized the plight of small-business owners like Luther across the country.

Limbaugh warned "this is a tinderbox situation that is, I fear, being replicated in many parts of this country where these authoritarians are."

"You know, all politicians have a craving for power. It is a miracle the United States Constitution still rules the roost," he said.

But that may not always be.

"It is amazing that after 200-plus years, everybody we’ve elected has decided to subordinate themselves and their power, their desires to it. I fear that’s coming to a change. I think some of these blue state governors and so forth are so infatuated with this new power that have had found that the natural authoritative tendencies that people in politics have," he said.

"That you’re incompetent. You can’t live without them. You can’t do the right thing unless they do it for you. You can’t spend your money wisely ’cause you’re not smart enough like they are. They have to do everything for you. Like this woman. 'What do you mean, going back to work? You have violated the law!'"

Limbaugh argued it's "the government’s burden to prove your job can’t be operated safely."

Luther said she had to act.

"I don’t want to cause any problems, but when you’re out of money someone has to stand up and say that they’re not helping us by not letting us work," she said.