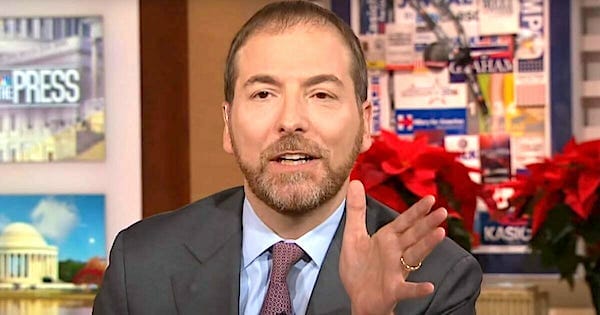 President Trump called for the firing of NBC News anchor Chuck Todd after the network admitted to using a deceptively edited clip of Attorney General Bill Barr talking about the Michael Flynn case.

On "Meet the Press" Sunday, a clip showed Barr saying "history's written by winners." It left out the context. Barr said a "fair history would say that it was a good decision."

"@FCC THIS IS A DISGRACE, EVEN WORSE THAN @NBC USUALLY IS, WHICH IS REALLY BAD. SLEEPY EYES MUST BE FIRED!," he wrote on Twitter.

Bloomberg News said it was unclear what the FCC was being asked to do since it controls television station licenses but not personnel decisions.

Trump continued: "Sleepy Eyes Chuck Todd should be FIRED by ‘Concast’ (NBC) for this fraud. He knew exactly what he was doing. Public Airwaves = Fake News! @AjitPaiFCC @FCC."

The Western Journal pointed out the network's backtracking didn't solve the matter.

In the interview with Barr, Catherine Herridge of CBS asked how history would judge the DOJ's decision to drop the case against Flynn.

"Well, history's written by the winners. So it largely depends on who's writing the history," Barr began.

Todd said he was struck "by the cynicism."

"He didn't make the case that he was upholding the rule of law. He was almost admitting that, yeah, this is a political job," Todd charged.

"I think a fair history would say it was a good decision because it upheld the rule of law. It upheld the standards of the Department of Justice, and it undid what was an injustice," the attorney general said.

Today on Meet The Press, @chucktodd wildly took context out of an answer AG Bill Barr gave about his decision to drop the case into Gen. Michael Flynn.

I cut Todd's segment along with Barr's full answer together. Look at how blatantly dishonest this is. pic.twitter.com/tODOEwL48V

Sleepy Eyes Chuck Todd should be FIRED by “Concast” (NBC) for this fraud. He knew exactly what he was doing. Public Airwaves = Fake News! @AjitPaiFCC @FCC https://t.co/fLTDhjMXo4

Very disappointed by the deceptive editing/commentary by @ChuckTodd on @MeetThePress on AG Barr’s CBS interview.

Compare the two transcripts below. Not only did the AG make the case in the VERY answer Chuck says he didn’t, he also did so multiple times throughout the interview. pic.twitter.com/PR1ciceMmE

Fox News reported blogger Jim Treacher and journalist Tim Pool were among many other influential commentators seeking an on-air apology.