How could a cheap, effective drug, FDA-approved and in use worldwide since 1955, suddenly be restricted for outpatient use by American physicians? On March 28, 2020, as physicians worldwide were seeing striking success using hydroxychloroquine to treat COVID-19, the FDA erected bureaucratic barriers.

Rick Bright, Ph.D., is an FDA bureaucrat, vaccine researcher and was appointed by President Obama on Nov. 15, 2016, to head BARDA (Biomedical Advance Research and Development Authority, a sub-agency of the FDA). In an unprecedented move, Bright expanded his power and claimed credit for being the person imposing his will on all of us.

In an appalling admission, Bright said: "Specifically, and contrary to misguided directives, I limited the broad use of chloroquine and hydroxychloroquine, promoted by the administration as a panacea, but which clearly lack scientific merit." Meanwhile, he promoted both remdesivir, a never-approved experimental antiviral in development by Gilead Sciences, and a vaccine for COVID-19. Early effective use of the older, safe and available hydroxychloroquine, whose patents had expired decades ago, would decrease demand for these new products.

Rick Bright's dictatorial decree limits the use of chloroquine (CQ) and hydroxychloroquine (HCQ) from the National Strategic Stockpile in COVID-19 to hospitalized patients only. States are using Bright's fiat to impose broad restrictions limiting the drugs' availability for physicians to use for outpatients to help them recover without hospitalization.

In other countries, early use in outpatients is changing the life-and-death equation by reducing severity and spread of illness, greatly reducing the need for hospitalization and ventilators and markedly reducing deaths.

By his own admission, Rick Bright, who is not a physician, knowingly and unilaterally countermanded Secretary of Health and Human Services Alex Azar, Adm. Giroir in charge of Public Health Service and the president of the United States, who had directed BARDA to establish a Nationwide Expanded Access Investigational New Drug ("IND") protocol for chloroquine, which would provide significantly greater outpatient access for the drug than would an Emergency Use Authorization (EUA). Unlike an EUA, a Nationwide Expanded Access IND protocol would make the drug available for the treatment of COVID-19 outside a hospital setting at physicians' medical discretion based on patients' needs.

How does one non-physician bureaucrat have such power with impunity? How can one person brag about blocking physicians' attempt to reduce hospitalization and deaths during a national emergency?

It is a falsehood to say that the administration promoted HCQ as a "panacea" or that this medicine "clearly lacks scientific merit." Both statements are contradicted by video recordings of presidential briefings, by NIH/CDC studies going back 15 years, and by U.S. and worldwide clinical outcomes studies in COVID-19.

It is unprecedented to restrict physicians from prescribing FDA-approved drugs for a newly discovered use – "off-label." This is contrary to FDA regulations in place since World War II.

Basic science studies published in 2005 from our own CDC and NIH showed clearly that CQ and HCQ work early in SARS-CoV to block viral entry and multiplication, and suggested that they would not work as well in late-stage disease when the viral load had become huge. When SARS-CoV-1 waned and disappeared by late 2003, the drugs were not submitted for FDA-approval for this coronavirus.

In 2019, when Chinese doctors recognized the deadly impact of SARS-CoV-2, they began trying known and available anti-viral medicines, especially CQ and HCQ, based on 15-year-old studies. They shared information with South Korea, India, Turkey, Iran and several other countries, which also began quickly and successfully using CQ and HCQ, alone or with azithromycin. Later, Brazil, Israel, Costa Rica, Australia and others followed, with good results.

Based on these initial clinical reports, President Trump said, at an early press briefing, that CQ and HCQ "offered hope."

More studies have replicated these findings. HCQ given within the first week of symptoms, especially with zinc, can prevent the virus from entering your body's cells and taking over, much like people use locks and alarms to stop burglaries. Waiting until you are in the ICU is like installing home locks and alarm system after burglars have invaded, vandalized your home and stolen all your valuables. The drugs cannot reliably undo the damage from the exaggerated immune response, or cytokine storm, triggered by COVID-19.

Examples from the world data on May 18, 2020, which is updated daily, show how Third World countries are faring far better than the U.S., where entrenched bureaucrats, governors, and medical and pharmacy boards are interfering with physicians' medical decisions. 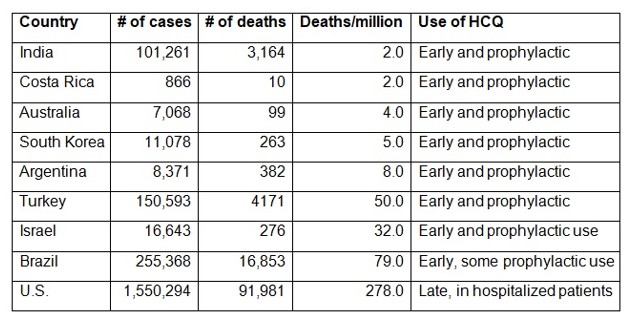 Instead of orchestrating a war on HCQ, the media should be asking key questions, such as:

Bright's disastrous bureaucratic decision may well be remembered as one of the worst preventable medical tragedies in our time. Never again should one government employee be allowed unrestrained power without oversight, and be allowed to make a sweeping order interfering with the prescribing authority of front-line physicians trying to save lives.

Elizabeth Lee Vliet, M.D.
Dr. Vliet is the President and CEO of Truth for Health Foundation, a 501(c)(3) public charity, and the creator of the Foundation's innovative six initiatives that advocate for early outpatient COVID treatment, assist families of hospitalized patients denied effective treatment, defend medical freedom, and provide international educational and training programs focused on effective strategies for COVID and on the interconnections of health, faith and lifestyle approaches for restoring resilience and quality of life. Since February 2020, Dr. Vliet has been part of the team of frontline physicians treating COVID early at home to reduce hospitalizations and death. With Dr. Peter A. McCullough, she is a co-author/editor of the Guide to COVID Early Treatment: Options to Stay Out of Hospital and Save Your Life.
Exposed: Inhumane, lethal COVID Protocol in hospitals
A holiday gift of hope: Early COVID treatment
Proof home-based treatment trumps the failed Fauci model
Surviving COVID: Why poorer nations have lower death rates
Death toll mounts as FDA denies HCQ for outpatient therapy
See more...