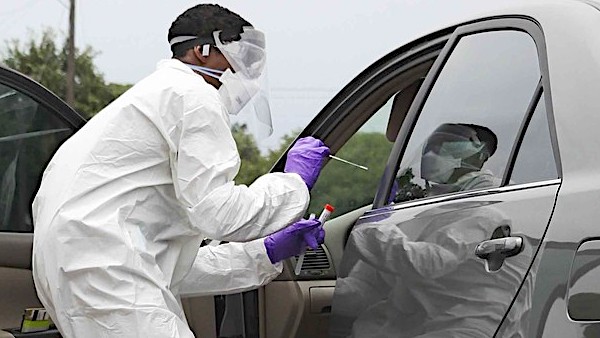 A Washington state lawmaker is alerting citizens to "isolation camps" set up in his state and others to house people who become infected with COVID-19, warning that contrary to the conventional narrative, they are not voluntary.

State Republican Rep. Matt Shea of the Spokane area in eastern Washington, explained in a video interview with The New American magazine that the camps are part of Democratic Gov. Jay Inslee's policy of contract tracing, which has been implemented by many states.

He explained that the tracers visit people who may have been infected and advise them they can isolate at a center to protect other members of their household.

While the infected person may be asked to volunteer, the government makes it clear that people can be forcibly quarantined, Shea pointed out.

He read a line from a form that local health officers are to present to someone who is infected.

It says: "If you do not comply with this request for voluntary quarantine I may/will sign a detention order, enforced by the police, to ensure your compliance."

Shea said the centers are being set up at county fairgrounds, and he is hearing of it happening in other states.

He noted that another element of the contact tracing in Washington state was Inslee's order that restaurants log the names and contact information of anyone who sits down to eat. Fierce opposition to the policy led to the governor withdrawing the measure.

Shea said that media, acknowledging there are isolation camps, have called the claim that they are not voluntary a "conspiracy theory."

Facebook, in fact, has been censoring posts he said, insisting it is voluntary.

But it's not voluntary, he pointed out, when you have a "detention order, enforced by police" to ensure compliance.

The Washingon State Department of Health issued a statement May 15 "on misinformation circulating about quarantine orders and facilities in Washington state."

The state insisted actions regarding isolation and quarantine "are voluntary and confidential, despite the misinformation being spread by some."

But later in the statement, the health department says "local health officers" have the authority to "involuntary isolate or quarantine an individual."

"Each local health jurisdiction in Washington has plans and processes in place should involuntary isolation or quarantine be needed," the statement says.

See the interview with Matt Shea:

WND reported earlier this month the health director for California's Ventura County declared at a news conference that he had mobilized teams who were prepared to remove people infected with the coronavirus from their homes.

Dr. Robert Levin, who was announcing the launch of a pilot program called Community Contact Tracing, was forced to clarify his remarks after many country residents understood him to be saying that people could be forcibly removed from the homes.

The county's public information officer, Ashley Bautista, told WND she had been dealing with the reponses of confused and angry citizens.

"So people were feeling like Dr. Levin was saying that the county is going to rip people out of their houses, and that's just not the case," she said.

However, she acknowledged that "legally speaking, a public health officer has the authority to do that."

According to the National Conference of State Legislatures, every state, the District of Columbia and most territories have laws authorizing quarantine and isolation, usually through the state’s health authority.