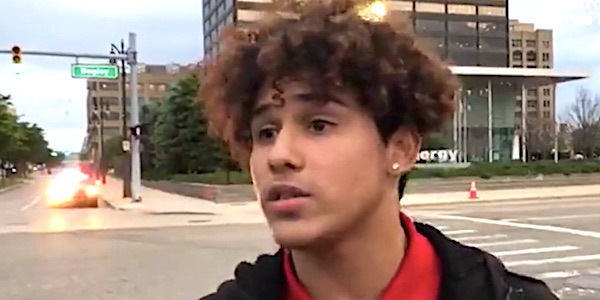 16-year-old Stefan Perez unexpectedly found himself at the center of a large Detroit protest over the death of George Floyd. As the city approached its 8 p.m. curfew, with police equipped in riot gear prepared to disperse the crowds of protesters along Detroit’s Michigan Avenue, Perez emerged as one of the leading voices at the scene.

Holding a megaphone minutes before the citywide curfew was to take effect, Perez found himself speaking to the crowd actively encouraging his fellow protestors to peaceably disperse.

“The fact that I was able to put my hand up and stop everybody from causing trouble here tonight, I look back and smile at that moment,” Perez said in a statement to the Detroit Free Press. “The people followed me into battle and I’m glad that I was able to get them home safely.”

Perez’s actions were commended across the city by fellow protestors and Detroit Mayor Mike Duggan.

“[Mayor Duggan] called me and said that he thought the kid was remarkable and said he brought tears to his eyes,” said Toson Knight, a former staffer for the Mayor who attended the protest.

Detroit has thus far managed to avoid the level of violence and destruction seen in other U.S. cities, including Minneapolis, New York, and Washington, and Perez’s leadership may have well prevented rapid escalation. He emphasized the peaceful nature of Monday’s protests, and indicated that he planned to participate in protests throughout the week in order to continue to protest racial injustices in a peaceful and effective way: “I had plenty of help today. But I’m here. I’m alive. I woke up today enough to do this. I’m just glad that I’m here. I’m glad I was able to take a knee, put my hand up and say ‘Black Lives Matter.'”

WND News Services
These reports are produced by another news agency, and the editors of WND believe you'll find it of interest.
Leftists resume riots as soon as Biden in inaugurated
Trump-bashing media now fawns over Biden
Juan Williams bursts into tears live on air as Biden inaugurated
More than 100 evangelical leaders thank President Trump for his policies
Stocks rally to a record as Biden sworn in, Netflix soars
See more...