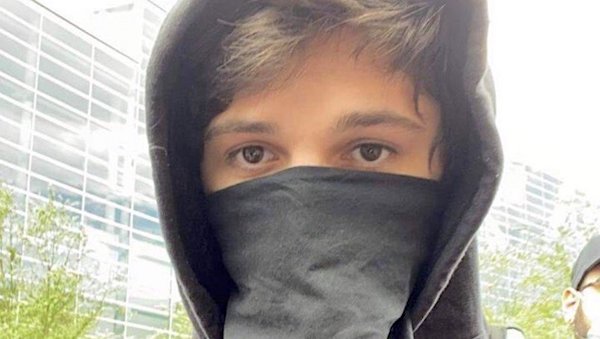 A left-winger who allegedly incited multiple riots during protests Saturday in Pittsburgh is an Amazon employee, according to police reports.

Brian Bartels, 20, is accused of starting violent riots in Pittsburgh during a Saturday demonstration against George Floyd, a black man who died after a police officer knelt on his neck for several minutes, according to video of the incident. Bartels is an Amazon employee, police reports say.

He turned himself into police on Monday night, escorted by his parents.

Video appears to show Bartels breaking windows of a police cruiser as peaceful protesters begged him to stop. He was wearing all black with a black bandana around his face during the protest, according to video from the scene.

Bartels faces charges of vandalism, rioting, and criminal mischief, reports show. He also used red or orange spray paint to damage a police vehicle Saturday afternoon, used something to break a police car window, and encouraged others to do the same before disappearing into the crowd, according to police reports.

.@PghPolice are seeking a Shaler man suspected of inciting yesterday’s violence. A warrant has been issued for his arrest.https://t.co/cbKQAttYps pic.twitter.com/E9FbR0D21v

Bartels’ parents escorted him to the police station as he turned himself in. An anonymous tip from a co-worker at Amazon identified him as one of the culprits who was involved in destroying the police SUV, police told the Pittsburgh Post-Gazette Monday.

Police said an anonymous tip from a co-worker of Mr. Bartels at Amazon identified him as one of the culprits who was involved in destroying the marked police SUV that was parked along Centre Avenue at Washington Place near PPG Paints Arena. Police are not accusing him of igniting the vehicle.

The Antifa kid who police say incited riot in Pittsburgh has been arrested and watching him turn himself in with mommy and daddy is the absolute greatest thing on the internet today.pic.twitter.com/pTZUPV9XZL

Police conducted a search warrant of his home and discovered guns, spray paint and gloves, as well as a sweatshirt matching the one seen in the video of the protest. Neighbors said they hardly ever saw Bartels and that his house was typically empty, according to local media reports.

The Trump administration and conservatives believe that the riots are the handiwork of antifa, a left-wing group that has incited violence at dozens of protests in recent years. President Donald Trump announced on May 31 that the United States is officially designating the group as a terrorist organization.

Amazon declined to comment about Bartels’ employment at the company.