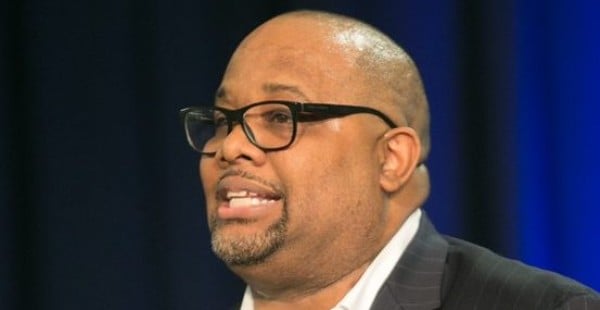 A prominent black pastor on Chicago's South Side laments that the rioting and looting that have engulfed protests of the death of George Floyd have erased years of progress in his community, placing ultimate blame on liberal political policies.

"We worked tirelessly to turn around the city's most violent neighborhood, only to see it burned and looted," wrote Corey Brooks in an opinion piece for the American Conservative website.

Brooks is the founder and senior pastor of New Beginnings Church of Chicago and founder and CEO of Project H.O.O.D Communities Development Corporation. His organization focuses on building dialogue, families and community leaders, with a special emphasis on young black men who are exiting gangs.

He said that when he founded his church, the neighborhood had one of the nation's highest homicide rates.

"Over the years, we have changed that statistic. We have built a thriving church with an average of 600 to 750 people at our services each Sunday," the pastor wrote. "We have a community center with a free gym, a career center that offers advice and assistance with interviews, and a high-impact jobs training program that has helped people build successful careers in fields such as construction or landscaping."

Brooks said that where "despair once reigned, we have replaced it with hope and opportunity." But the riots of the past week "have set us back in our ministry work and have done incalculable damage to our community."

"The physical damage to property pales in comparison to the damage done to our morale."

Brooks pinned the ultimate blame on liberal politicians in Illinois and across the country who have "fanned the flames of anger over the past several years."

"Their policies and worldview emphasize government as the solution to all problems, except, paradoxically, when we need police," he said.

The protests began as a "natural outpouring of grief" over the death of a 46-year-old black man, but black communities and businesses are among the victims of the violence.

"How does it advance our cause of racial harmony to wreck the black communities?" he asked.

The looting of grocery stores along with the CVS and Walgreens stores have had an immediate impact.

"Church members are shuttling members of our community out to the suburbs to get their prescriptions and basic goods," he wrote.

He wonders if those stores will ever come back.

Brooks emphasized that the foundation of society is the rule of law.

"The tragic killing of George Floyd reminds us that we need better training and screening for police officers. But the vast majority of the law enforcement agents in our nation advance racial equality, and help black Americans participate in the American dream," he said.

"No one, after all, wants to live in an un-policed and lawless neighborhood."

He said the rampant violence that has plagued Chicago for decades "has nothing to do with isolated incidents of police brutality."

Brooks pointed out that over the Memorial Day weekend, 10 African-Americans were shot and killed in drive-by shootings.

"I've given funeral sermons for victims of drive-by shootings in the past, and those victims’ deaths are each a senseless tragedy," he said.

Brooks said the consequence of liberal police reform is for law enforcement agents to retreat from their duties, "but this is exactly wrong and will weaken our neighborhoods."

He said it's "no coincidence that the most violent looting and destruction took place this past week in cities heavily controlled by Democrats."

"I've been attacked, been robbed, life has been threatened," the pastor concluded. "Black Americans deserve better than this."