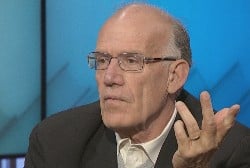 After morphing into splinter groups, the protest of the death of George Floyd in police custody has become "wholistic," entering a new stage accentuating the ongoing clash between the values of two different historic revolutions, the American of 1776 and the French of 1789, observed scholar Victor Davis Hanson.

Hanson, a senior fellow at the Hoover Institution, said in an interview with Eric Metaxas he seeing characteristics of the French Revolution's Jacobin dictatorship, known for its "reign of terror."

"Everything is on the table," he said. "I never imagined that NPR would be telling listeners to decolonize their library or there would be women to shave their heads so they wouldn't have non-African American hair, or they wouldn't privilege their whiteness."

He also cited ideas gaining traction such as banning cop shows, abolishing police departments and "pledging formally what we're going to do to promote racial diversity and identity politics."

"We're entering a space now that's even transcending the violence," he said. "When you have FBI people or health care workers that are in reeducation camp mentalities, where they bend a knee, take a formal oath."

It's affecting sports, entertainment and the military.

Facing the ruin of his career, New Orleans Saints quarterback Drew Brees has apologized several times for saying he would never disrespect the U.S. flag, referring to the National Anthem protests. He and his wife are now renouncing their "white privilege," Hanson noted.

And a dozen military leaders recently came out calling Trump's willingness to deploy the military to secure order amid violent protests as fasict, Mussolini-like or Nazi-like.

The American Revolution was founded on liberty and equality of opportunity, Hanson pointed out. For the less fortunate, there is a moral role for churches, communities, families and even government.

But the French Revolution's values of "egalitarianism and fraternity" were based on equality of result. The revolution sought to change every aspect of the citizen's life.

"They're not happy, they're not satisfied that the number of black Americans who are killed unarmed by the police is less than whites ... or that interracial crime is assymetrical," Hanson said.

"We're in a revolutionary fervor that's going to change everything we look at, from our sports to our politics, everything," he said.

How we got here

Hanson said that among the reasons why America got to this point is globalization and multiculuralism.

"We gave up on the melting pot of integration and assimilation," he said, with 55 million people in the country who were born abroad and are not familiar with American values.

There also is the educational crisis, which has an economic element.

"We sent millions of young Americans to be indoctrinated in the university," he said.

They ended up with "the ignorance and the arrogance" of thinking they had been educated, which is "a fatal combination."

Metaxas observed that America is experiencing a reckoning with utopianists "who have been around a long time."

The election in November, he said, will be a referendum on whether America chooses the French or the American revolution.

Trump has taken a stand, he said, but establishment Republicans such as Mitt Romney, Colin Powell, George W. Bush, Bill Kristol and George Will have sided with the left against him.

"They prefer to lose nobly and be accepted as part of the establishment than to win in a way that might question their cultural or their social fides," he said.

Hanson said he's never seen before what he's witnessed regarding Trump, the Republican establishment attacking a conservative "because they felt that in some way his mannerism or his comportment were not conducive to conservative advocacy."

But conservatives, he said, have had to "make the elementary calculus" regarding Trump.

They reason, Hanson said, "Wait a minute, the fact that Trump is crass and can be crude is more important to these very well off [establishment figures] than 300 conservative judges that affect my future, or 3% GDP growth or minority unemployment, or getting out of that awful Iran deal."

"All of that doesn't matter (to them) because they feel that as conservative elites, they have the money or the influence to exempt themselves from the ideologies that are so pernicious and fall so heavily on the middle class," Hanson explained.