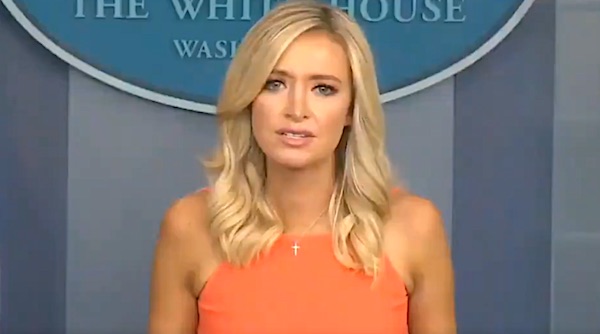 Does President Trump wish the Confederacy would have won the Civil War?

That was an actual question posed at the White House on Monday by Ryan Lizza, a CNN political analyst and Politico White House correspondent.

Lizza noted to White House Press Secretary Kayleigh McEnany "there's a national conversation going on right now about the proper place of symbols of the Confederacy — statues, memorials, names — and that the president has repeatedly inserted himself into this debate."

He said many people are trying "to understand what his view of memorializing the Confederacy is, and the proper place of the Confederate flag."

So, his first question was "does President Trump believe that it was a good thing that the South lost the Civil War?

McEnany, staring with incredulity, said the question "is absolutely absurd."

"He's proud of the United States of America," she said of Trump.

This is an ACTUAL question from Ryan Lizza.

"Does President Trump believe that it was a good thing that the south lost the Civil War?"@PressSec smacks down Lizza's "question": "Your 1st question is absolutely absurd. He's proud of the United States of America." pic.twitter.com/4qq0KFiP4Y

Lizza's second question was whether or not Trump is "interested in following NASCAR's example" by "banning the Confederate flag at his own events."

McEnaney replied that Americans "oppose tearing down our statues."

"There's a Harvard/Harris poll released just last week that shows 60% of respondents said the statues should remain, and 71% said local governments should block groups from physically destroying the statutes. So he stands on the side of preserving our history," she said.

Lizza pressed further, asking if Trump would ban the Confederate flag at his rallies.

"That would be a question for his campaign," she said. "But look — this president’s focused on taking action, on fixing problems. That’s why he had his executive order, just a few weeks ago, to keep our streets safe and secure. That’s where his focus lies. And I think that those who are tearing down statues, they do appear to have no ideology when they are tearing down statues and defacing statues of Matthias Baldwin, an abolitionist; Hans Christian Heg, who died fighting for the Union Army during the Civil War; a memorial for African American soldiers who fought in the Civil War was damaged in Boston; and a monument to fallen police officers was vandalized in Sacramento. This is unacceptable; it’s why the president took strong action; it’s why he has an executive order saying those tearing down statues will be punished to the fullest extent of the law; it’s why four people were charged. He will not stand for lawlessness and chaos. He stands with 71% of Americans who say there is no place for tearing down statues, as these anarchists are doing across the nation.

Pollak noted that last year, the president stated in a July 4 address: "Devotion to our founding ideals led American patriots to abolish the evil of slavery, secure civil rights, and expand the blessings of liberty to all Americans."