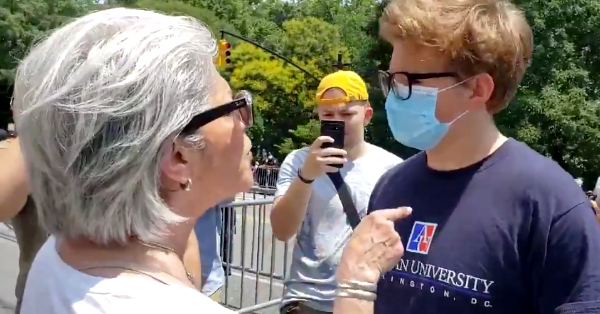 At a protest in New York City of a statue of Teddy Roosevelt, a local woman fired back at a college student who told her to "check her f***ing white privilege," advising him to educate himself on the history of the United States of America.

During the clash with counter-protesters on Sunday, the white-haired woman warned the opponents of the monument to the 26th president that they will "fall so hard they won’t know" what "hit them," according to video posted on Twitter by Daily Caller reporter Jorge Ventura.

"You are a domestic terrorist group and we will see to it that you fall, and you fall so hard you won’t know what hit you," the woman said.

That was when the student, wearing an American University shirt, moved toward her and shouted, "Yo, lady. Check your f***ing privilege and get back over there."

The student said, "Go back there."

The student told the woman and the accompanying counter-protesters, "You're bigots."

The Daily Caller reporter recorded another video in which Ventura explained to him why she showed up at the protest.

"What they're doing is trying to erase history," she said, describing Roosevelt as "one of our greatest presidents ever."

"It takes my breath away that something as beautiful and as magnificent as that (statue), and Chirlane McCray, the mayor's wife, deems it unfit," she said.

The woman said it shouldn't be allowed any longer.

"This is America. We stand with all races, all colors, all creeds. People came to this country to seek those freedom, and now, from the inside out, they wanna take them away. It’s not gonna work. We won’t allow it."

"This is not about race anymore it never really was this is about taking apart the fabric of America" says protester at the defend #TeddyRoosevelt statue protest in #NYC pic.twitter.com/zVWqcuiuIF