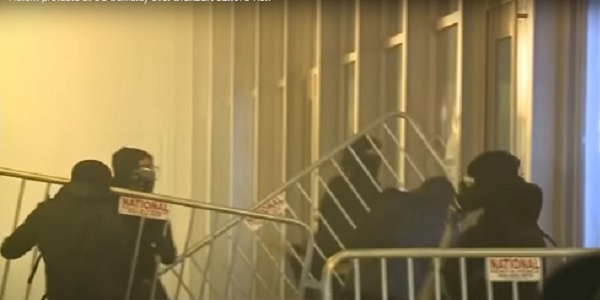 Antifa suddenly is in the news again, with the federal government investigating the far-left militant movement's role in the violence that has engulfed the protests over the death in police custody of George Floyd in Minneapolis.

A hearing has been scheduled before the 9th U.S. Circuit Court of Appeals next week in a lawsuit filed by a woman who was assaulted in 2017 when media personality and political commentator Milo Yiannopoulos was scheduled to speak on the campus of the University of California at Berkeley.

Antifa radicals and others opposed to his appearance rioted, causing more than $100,000 in damages to the campus.

Caught up in the attack on free speech was the plaintiff in the lawsuit, Kiara Robles, who sued Antifa members Ian Dabney Miller of Oakland and Raha Mirabdal of Berkeley.

The case, filed by attorney Larry Klayman of FreedomWatch, was dismissed by a district court, and now the 9th Circuit will review whether it will be reinstated and address the damages inflicted.

The complaint states an estimated 1,500 demonstrators gathered at UC-Berkeley's Sproul Plaza. The demonstration erupted into violence just 15 minutes after Robles' arrival on campus.

"The violence was planned, orchestrated, and carried out by Defendants Miller, Mirabdal, and Does 1-20, all of whom were members of Antifa," the complaint says.

"Several people, including plaintiff Robles, were intentionally and violently attacked by both masked and unmasked defendant assailants, including Miller and Mirabdal."

Robles, it asserts, was subjected to "extremely painful pepper spray and bear mace" because "she chose to exercise her right to freedom of speech and show support for the planned speaker."

The cases is a constitutional dispute because "defendants – in concert with each and every named defendant, jointly and severally – have worked in concert to deny numerous individuals who attended the Milo Yiannopolous event, including plaintiff Robles, their constitutional right to freedom of speech and freedom of assembly, as guaranteed by the First Amendment to the U.S. Constitution."

The organization's tentacles are long, the complaint charges, with Antifa receiving sponsorship from the Alliance for Global Justice, which in turn is backed by left-wing billionaire activist George Soros' Open Society Foundation.

"The Antifa defendants achieved their goal to shut down the Yiannopolous event, as the event was officially canceled around 6:15 p.m., about 20 minutes after defendants Mirabdal, Miller and Does 1-20 began their vicious riot and attack on plaintiff."

Robles suffers from significant trauma and injury, including to her eyes, because of "the pepper spray, bear mace, and bright light" used in attacking her, as well as her "being beaten with flagpoles."

The appeal contends there were multiple errors made by the lower court judge, Claudia Wilken, who exhibited "extra-judicial bias and animus toward Mr. Klayman" and his client.

"This extra-judicial bias was likely due to the fact that Judge Wilken felt protective over her alma mater, U.C. Berkeley."

When case began, Klayman said, "It's time that those who believe in free speech and non-violence stand up for their rights and not cower to the hateful rhetoric and violence of the left — furthered and supported by the radical leftist media -- which are designed to take down the republic and install a 'Bolshevik style' dictatorship."