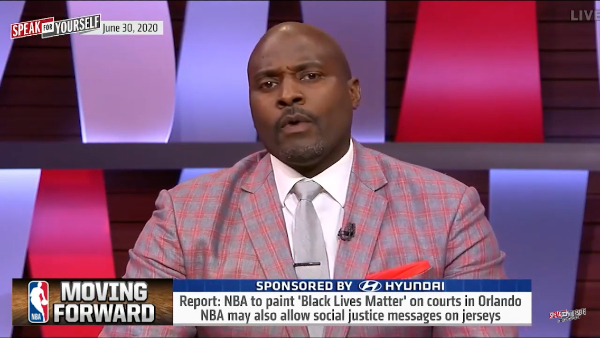 Discussing a report that the NBA plans to paint "Black Lives Matter" on courts and allow social justice messages on jerseys, a black co-host for a Fox Sports 1 show cautioned the league to make room for contrary opinions.

"I respect your space, I respect what you're protesting for," said Marecellus Wiley, co-host of "Speak for Yourself."

"But will you respect others who don't support that same protest?"

Wiley explained that there's a free-speech component to embracing a particular message, wondering how much "space" is allowed for people who disagree with the objectives of the organization Black Lives Matter.

He warned that identity politics "divides and polarizes."

Wiley, 45, wondered how many people have taken the time to examine the mission statement of Black Lives Matters.

He objected to BLM's aim of eradicating father-led, nuclear families and "white supremacy."

"I'm proud of you, but I've been fighting this fight for me and for others a lot longer," he said.

Wiley emphasized the importance of the family he grew up in and "the one I'm trying to create right now."

His mission in life is to be a husband and a father, he said, which is why he can't reconcile that with BLM's objective to "dismantle the patriarchal practice" and "disrupt the Western-prescribe nuclear family requirement."

Wiley cited statistics showing the failure of people who grow up in a single-parent home versus a two-parent home, confirming that failure was reflected in his friends.

He challenged the claim that "white supremacy" is a major problem in 2020, pointing out that he is on a TV show on a major network hosted by two black men.

A graduate of Columbia University, Wiley played 10 seasons in the NFL for four teams.

In a January 2019 interview with WBUR in Boston, he talked about growing up in Compton and South Central Los Angeles in the 1980s.

"I had uncles who used to be gang members, and I saw how they were respected and feared in the streets. But then I saw them come in the house. And I saw the tears. And I saw the weakness," he said.

"They didn't know how this was going to end. And, unfortunately, two were murdered, and one committed suicide."