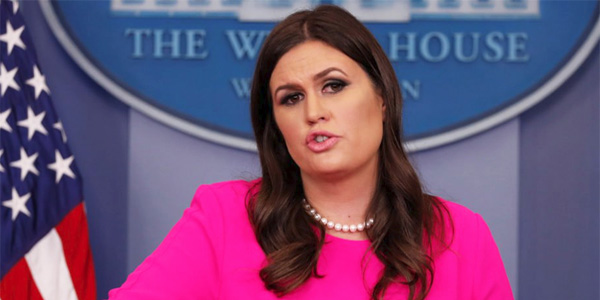 Sanders and other White House staff members were pulled over by the U.K police to wait for Bolton’s motorcade during a trip to dinner at the U.S. ambassador’s house during a 2019 state visit to London, Sanders wrote in an excerpt of her book “Speaking For Myself: Faith, Freedom, and the Fight of Our Lives Inside The Trump White House.”

Sanders released the excerpt on Twitter Monday, the day before Bolton’s own book publication June 23. Bolton’s book, “The Room Where It Happened,” contains numerous allegations against the Trump administration, especially Secretary of State Mike Pompeo and then acting White House Chief of Staff Mick Mulvaney.

After being held up by Bolton’s motorcade, “The discussion on the bus quickly moved from casual chit chat to how arrogant and selfish Bolton could be, not just in this moment but on a regular basis,” Sanders wrote.

“If anyone on the team should have merited a motorcade it was Mnuchin, but he was a team player. Bolton was a classic case of a senior White House official drunk on power, who had forgotten that nobody elected him to anything. Often Bolton acted like he was the president, pushing an agenda contrary to President Trump’s,” Sanders said in the excerpt of book.

Mulvaney confronted Bolton when the administration met up at Winfield House, which was rare for Mulvaney, according to Sanders. Mulvaney’s confrontation came after tolerating Bolton for months.

“When we finally arrived at the Winfield House, Mick Mulvaney, typically laid-back and not one to get caught up in titles or seniority, confronted Bolton and unleashed a full Irish explosion on him. He lit into him in a way I hadn’t seen him do to anyone before,” Sanders wrote.

“Let’s face it John,” Mulvaney told Bolton, wrote Sanders. “You’re a f— self-righteous, self centered son of a b—!”

Bolton “backed down and stormed off” after Mulvaney’s confrontation, Sanders said. “The rest of us looked on and nodded in approval, proud of Mick for standing up for us. Mick even got a few high fives from officials thrilled someone had put Bolton in his place.”

Sanders’ book is going to be released Sept. 8 on Amazon by St. Martin’s Press of Macmillan Publishers. Sanders did not immediately respond to the Daily Caller News Foundation.