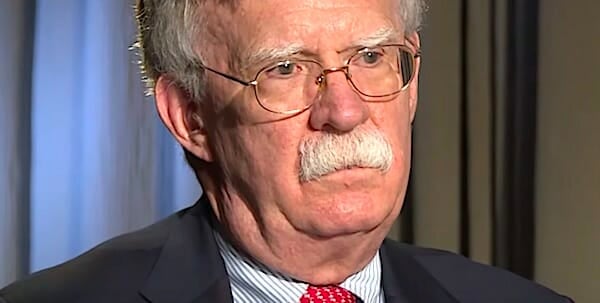 News that John Bolton's upcoming book will reveal "Ukraine-like" impeachable offenses across President Trump's foreign policy seems to have elicited more negative reaction from the left than the right.

The left is angrily ripping the former Trump national security adviser for not making those claims before an impeachment committee and in the Senate trial last winter.

The president's defenders, on the other hand, might be assuring themselves that if the Senate in January didn't think the president committed impeachable offenses, "Ukraine-like" may not turn out to be anything to worry about.

On Twitter, prolific Trump critic Rep. Ted Lieu, D-Calif., reacted to Simon & Schuster's release promoting the book by describing Bolton as "an example of a purported public servant who not only put party over country, he put his own profits over country."

In "The Room Where It Happened: A White House Memoir," Bolton, according to the publisher, "argues that the House committed impeachment malpractice by keeping their prosecution focused narrowly on Ukraine when Trump’s Ukraine-like transgressions existed across the full range of his foreign policy."

MSNBC justice and security analyst Matthew Miller, a former publicist for the Justice Department, the Senate and many campaigns, was livid.

"I try to keep this feed PG-13, so I'm afraid there's nothing I can say here about the press release John Bolton just put out," he wrote.

Joe Lockhart, former press secretary for President Bill Clinton, said he can't "think of a person less qualified to pass judgement on the impeachment hearings and trial than John Bolton."

"Your rock is waiting for you to climb back under," said Lockhart, now a CNN analyst.

However, based on what the publisher has disclosed, if Bolton had testified in the Senate trial, the argument for impeachment derived from his testimony might have sounded familiar to one of the president's famous lawyers, Alan Dershowitz.

According to the publisher, Bolton writes in his book: "I am hard-pressed to identify any significant Trump decision during my tenure that wasn’t driven by re-election calculations."

Simon & Schuster says Bolton "argues that the House committed impeachment malpractice by keeping their prosecution focused narrowly on Ukraine when Trump's Ukraine-like transgressions existed across the full range of his foreign policy."

However, during the Senate trial, the Harvard Law emeritus professor and the president's legal team contended there was nothing illegal or impeachable in President Trump's interactions with Ukrainian President Volodymyr Zelensky.

Further, on the Senate floor, Dershowitz specifically rebutted the Democrats' claim that Trump should be impeached because he would benefit politically if Ukraine announced an investigation of alleged corruption by a potential rival in the 2020 election, Joe Biden.

Dershowitz argued that even if Trump had in mind that such a probe would strengthen his re-election chances, it was not an impeachable offense.

He pointed out there also was a national interest in probing the conflict of interest concern raised by the State Department in Hunter Biden's lucrative board position with a Ukrainian energy firm under investigation for corruption while his vice president father oversaw U.S. relations with the nation during a bilateral anti-corruption effort.

"Every public official I know believes his election is in the public interest," Dershowitz told the senators.

"And if a president does something which he believes will help him get elected in the public interest, that cannot be the kind of quid pro quo that results in impeachment."

During the 2012 election campaign, President Barack Obama famously was caught on camera assuring outgoing Russian President Dmitry Medvedev that he would have "more flexibility" to deal with the controversial missile defense issue after the U.S. election.

Dershowitz, in his argument during the trial, cited President Abraham Lincoln's ordering of Gen. William Sherman to let Indiana troops leave the front lines to vote in the presidential election in which he was running.

"Everybody has mixed motives and for there to be a constitutional impeachment based on mixed motives would permit almost any president to be impeached," Dershowitz said.

After his defense of Trump, Dershowitz was criticized for what CNN contributor and former Bill Clinton adviser Paul Begala described as the "ludicrous 'Dershowitz Doctrine."

"His upside-down rule would make presidents immune from every criminal act, so long as they could plausibly claim they did it to boost their re-election effort," Begala wrote in an op-ed.

Firing back, Dershowitz said his argument was mischaracterized, "as if I had said that if a president believes that his re-election was in the national interest, he can do anything."

"I said nothing like that, as anyone who actually heard what I said can attest," he said.

The White House, according to news reports, tried to prevent Bolton's book from being released, claiming it divulges classified information.

Simon & Schuster said in its release that Bolton in recent months has "worked in cooperation with the National Security Council to incorporate changes to the text that addressed NSC concerns."

"The final, published version of this book reflects those changes, and Simon & Schuster is fully supportive of Ambassador Bolton's First Amendment right to tell the story of his time in the Trump White House."