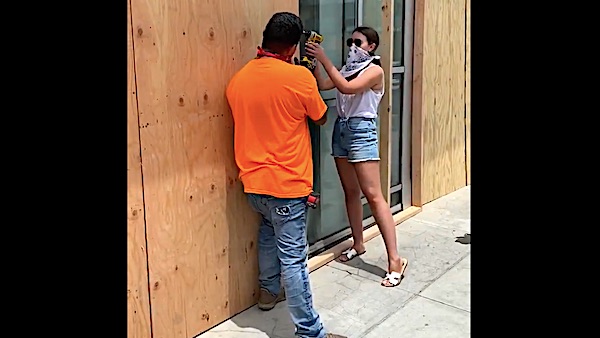 Protests have turned to riots in cities such as D.C., Los Angeles, Chicago, and New York City following the death of George Floyd, a black man who died after a police officer knelt on his neck for several minutes, according to video of the incident. The police officer, Derek Chauvin, has been fired and charged with third-degree murder and second-degree manslaughter.

Several young women have been photographed or video taped as they posed in front of wreckage.

Footage taken in Santa Monica, California, posted Monday showed a young woman posing for a photo with a worker who is attempting to board up a business.

“Boyfriends of Instagram,” a voice says, as the man who took her photo also climbed into the car.

“Good job guys! BLM,” a voice says. It is unclear who is speaking.

The video has since gone viral, garnering widespread condemnation from social media users. A College Fix writer, Fiona Moriarty-McLaughlin, identified herself as the woman in the video in a USA Today op-ed where she denied that she made the “boyfriends of Instagram” or “BLM” comments. She also noted that the man in the video was her father.

This lady stopped someone boarding up a store in Santa Monica so she could hold the drill for a picture, then drove away. Please don’t do this. #santamonicaprotest #BlackLivesMatter #BlackLivesMatterLA pic.twitter.com/lgt2rZogk9

In another viral video, a woman taped a young man taking a picture of a young woman standing before the broken windows of a T-Mobile storefront. The woman, dressed in active wear leggings and a sports bra, posed with her back to the camera looking into the looted store.

It was not immediately clear where the video was taken.

“This girl is making her boyfriend take a picture of her in front of a smashed T-Mobile,” a person can be heard saying in the background of the video. “Oh my God,” the person said as the girl walked away with the young man who took her photo.

I knew this would happen eventually pic.twitter.com/V3bB92iaPB

Editor’s Note: This post has been updated to reflect comments from Fiona Moriarty-McLaughlin, who identified herself as the woman in the video in a recent USA Today column but denied that it was her voice in the video.