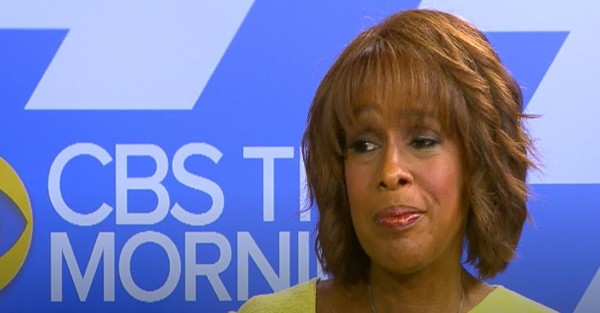 After a weekend of violent protests across the nation, CBS "This Morning" co-host Gayle King introduced a segment on race relations in which guests declared "white Americans" have been taught to have "contempt for black life."

Another said racism was like "dust in the air," something "ingrained in our society," reported LifeNews.

“After the death of George Floyd, we're taking a look at the history of the fear of black men in American society and how it often ends in violence against them," King said Monday.

The title on screen was "History of Fear; Experts Explain Why Some Conflate Blackness With Crime."

The actions of white Minneapolis police officer Derek Chauvin -- who kept his knee on Floyd's neck as the 46-year-old black man pleaded, "I can't breathe" --have drawn universal condemnation.

In the segment, correspondent Michelle Miller said protestors worldwide have "taken to the streets to call out police brutality and the systemic racism against black people."

LifeNews noted the tone for the segment was set by a clip of a white female protestor declaring: "My sign says 'White Silence = White Violence.' And I want everybody to recognize that, because white people are the people oppressing black people."

King spoke to author Tim Wise, who said "it’s not fear that drives people to conflate blackness with crime, but power and a disregard for some people of color."

"American history is one in which white Americans, by and large, have been taught to have indifference or even contempt for black life," Wise said. "We have defined the country as a white nation where people of color are here on a guest pass. And it’s a guest pass that we think we can revoke."

CBS News contributor Ibram X. Kendi said that "since the Jim Crow era, white people have had the right of using the police to their advantage."

"They recognize that they have the privilege to call a police officer with the belief that the police officer, even if they’re in the wrong, will be on their side," he said.

Jane Elliott, a teacher, said people need to educate themselves "as to the truth of this situation instead of believing the lie that has been promulgated in this country for the last 400 years."

"The lie of several different races and the lie of the rightness of whiteness. It’s a lie," she said.

"Everybody, I think, remembers what Colin Kaepernick went through. And his protest was a peaceful protest about this very issue, and he was ostracized, he lost his job, and he was blackballed for it," Abdul Jabbar said.

"White cops still can act with impunity and kill people that they feel like they want to kill," he said. "It’s got to stop someplace, and powerless people have no voice. A lot of them are losing their opportunity to vote because the Republicans are working very hard to limit voter participation. So what tools do these people have to effect change?"

King referenced Abdul-Jabbar's recent op-ed in the Los Angeles Times in which he said that racism is "like dust in the air," asking him to elaborate.

"Well, it’s just like if – have you ever been in a room and there’s something – you feel a little something itching in your nose?" he said. "There’s a – something in the air, a dust or pollen that you can’t see. ... Racism is like that."

The former NBA star said racism is "ingrained in our society and it’s taken for granted."

"And all of the things that are taken for granted can accumulate and be deadly on certain segments of the population. And it comes down on the heads of poor people and people of color," he said.