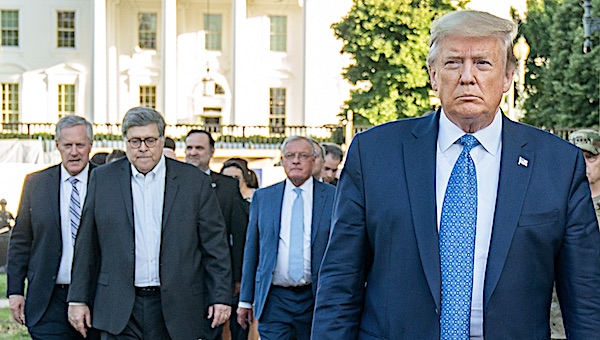 President Donald J. Trump walks from the White House Monday evening, June 1, 2020, to St. John's Episcopal Church, known as the Church of Presidents, that was damaged by fire during demonstrations in nearby LaFayette Square Sunday evening. (Official White House photo by Shealah Craighead)

Through selective editing, the CBS News program "Face the Nation" on Sunday minimized the violent rioting threatening the White House as it peddled false claims that President Trump ordered 10,000 active-duty military troops into the streets and that Defense Secretary Mark Esper clashed with the president over the use of the Insurrection Act, according to an analysis by a veteran Washington reporter.

Mollie Hemingway, a senior editor at The Federalist, writes that anchor Margaret Brennan left out of her interview with William Barr the attorney general's detailed accounting of the violent context of the clash in Lafayette Square outside the White House.

Some of the remarks missing from the broadcast were that "bricks and inflammable liquid" were being thrown at police as rioters "were trying to get entry" over the fences, five dozen officers were "lost" the previous night in the violence, and individuals "wrestled with the police officers trying to tear their shields from them, in one case, struggling to get one of the police officer's guns."

Hemingway also noted that the broadcast left out Barr's detailed comments on improving policing and how working with police agencies improves results.

The interview began with Brennan asking Barr about CBS' claim, based on a single anonymous source, that Trump ordered 10,000 active-duty military troops into the streets.

Barr said that was "completely false." And White House Director of Strategic Communications Alyssa Farah further denied the report via Twitter: "This is FALSE. I was in the mtg. @realDonaldTrump very clearly directed DOD to surge the National Guard – not active duty- after nights of vandalism & arson in DC."

But Esper actually said that using active duty forces for such situations should be only "as a matter of last resort."

"Edited out of the broadcast was Barr’s explanation of what constitutes a 'last resort' and the history of using the military in the states, beginning with the country’s first president George Washington who 'led the army into the field to suppress rebellion and insurrection in Pennsylvania in the very first term of his administration.' He noted he brought the military in last time he was attorney general, during the George H. W. Bush administration, once in the Virgin Islands," Hemingway wrote.

The "Face the Nation" report also left out Barr's provision of historical context.

"I would also point out it was done during the civil rights era in places like Selma, Alabama, and other places to integrate schools," he said. "The governors stood in the doorway. The governors did not approve the use of federal troops to enforce civil rights in the South."