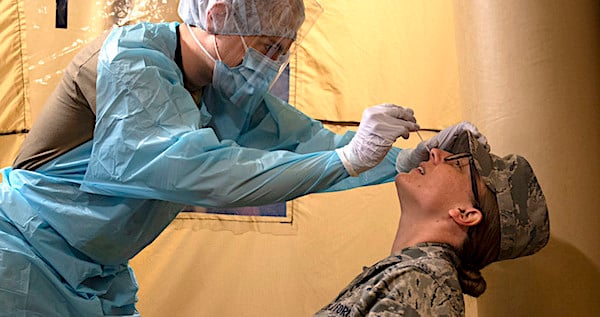 The Centers for Disease Control estimates the coronavirus may have infected 10 times more Americans than known, nearly 24 million, meaning the infection fatality rate is no higher than one half of 1%.

That percentage, which is higher than other current estimates, nevertheless sharply contrasts with the alarming estimate of 3.4% announced March 3 by the director general of the World Health Organization, Tedros Adhanom Ghebreyesusin, which fueled the global lockdowns.

In fact, Dr. Anthony Fauci, the top White House infectious disease expert, co-authored an article published March 26 in the New England Journal of Medicine predicting the case fatality rate for the coronavirus would turn out to be like that of a "severe seasonal influenza."

In an exceptionally bad flu season, the rate is about one-tenth of 1 percent, the authors wrote.

The rate may have turned out to be considerably lower among people under 70, according to a paper published this month by John Ioannidis, a professor of epidemiology and population health at Stanford University.

He found the infection fatality rates in that population ranged from zero to 0.23%, with a median of 0.04%.

His finding was based on a study of 23 "seroprevalence studies," which measure infection rates using the presence of antibodies in blood samples, Just the News reported.

The studies, Ioannidis wrote, "typically show a much lower fatality than initially speculated in the earlier days of the pandemic."

"It should be appreciated," he writes in the paper, "that [the fatality rate] is not a fixed physical constant and it can vary substantially across locations, depending on the population structure, the case-mix of infected and deceased individuals and other, local factors."

The implication for decision-makers, he said, is that they can tailor measures "to specific high-risk individuals and settings" rather than implement a "blind lockdown of the entire society."

See the WHO director-general at the March 3 news conference:

CDC Director Robert Redfield told reporters Thursday that surveys of blood samples taken from around the country suggest that millions of Americans may have contracted the virus either without knowing it or with only minimal symptoms, The Hill reported.

According to the Center for Systems Science and Engineering at the Johns Hopkins University of Medicine, about 2.4 million Americans have tested positive for the coronavirus. The current U.S. death toll is more than 127,000.

Redfield said that for every confirmed case, the CDC estimates that 10 more people have been infected.

"This virus causes so much asymptomatic infection," Redfield said. "We probably recognized about 10% of the outbreak."

Redfield cautioned that the pandemic is not over, saying it is "still serious."

"But I'm asking people to recognize that we're in a different situation today than we were in March or April," he said.

He explained that there are more cases today in younger people who are not as likely to develop serious illness or die from infection.

Redfield confirmed that case counts have risen in the Southern and Southwestern states while they have declined in the Northeast, which was once the nation's hot zone.

In New York, Gov. Andrew Cuomo said Thursday his state was treating fewer than 1,000 COVID-19 patients in hospitals for the first time since mid-March.

"We're not talking about a second wave right now, we're still in the first wave. And that first wave is taking different shapes," Redfield said.