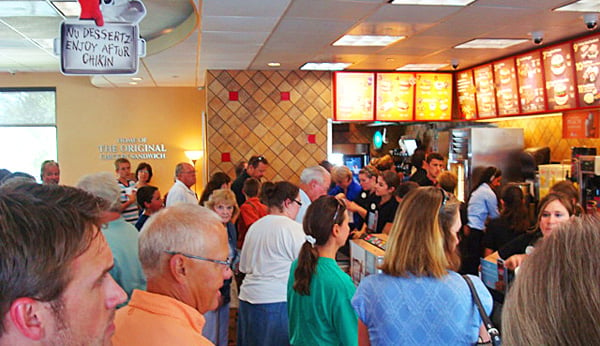 A Chick-fil-A franchise in Stuart, Florida, was packed with patrons on Aug. 1, 2012. (Photo by Joe Kovacs)

Chick-fil-A is in the hot seat again, this time because of a viral image of an employee wearing a "Back the Blue" shirt.

But the photo was from years ago and had nothing to do with the current protests against the death of a black man in police custody.

In fact, the post was meant to promote a local athletic team. 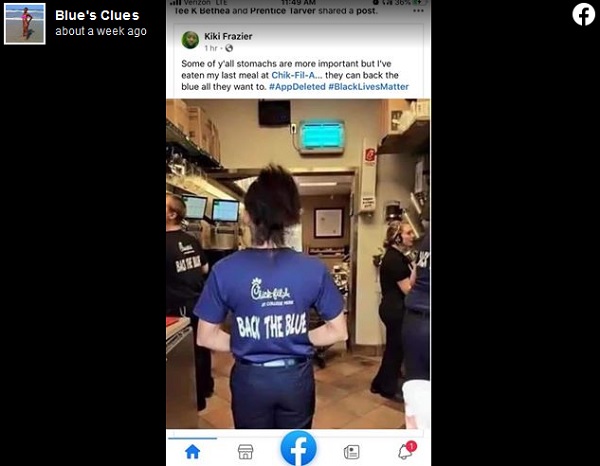 The Deseret News reported the image has been used as a trigger for those who claim the company is "racist."

"But the photo is actually older than you think. According to Reuters, the photo was taken in 2015 by one local Chick-fil-A restaurant that supported a football team in the area," the report said.

A company official said the photo was being taken out of context but apologized nevertheless.

Dan Cathy, Chick-fil-A's CEO, already has stated his company's position on the protests of Floyd's death.

"What I have come to understand is that they are tired of the violence, abuse and injustice. They are tired, because no amount of kneeling or marching seems to truly address what has ailed our country for generations: A controverted view of race, which is sometimes overt and sometimes subtle but always destructive," he said.

He cited the Old Testament story of Nehemiah, who "became aware of the plight of his people in Jerusalem" and as a result became "a catalyst for the renaissance in his homeland."

BizPacReview commented that "while there was a negative reaction to the shirts online from people who assumed they were supportive of law enforcement, others said there is nothing wrong with being able to identify an injustice — Floyd’s death — while still acknowledging that the vast majority of police officers are good people doing a tough job to protect communities."

"Fox News contributor and former U.S. Marine bomb technician John Joey Jones said during an interview on “Fox & Friends” Wednesday that 'honest people can' make the distinction. 'If that young lady’s dad is a cop, why couldn’t she wear ‘Back the Blue’ every single day? Why would she have to be shamed away from doing it, or why would her employer apologize for her? That’s a scenario that would be pretty reasonable. The point is, if you’re the type of person that the heroic actions of police officers … mattered to you two days ago, but for some reason don’t matter to you today, then you’ve succumbed to a narrative that isn’t true and you are the one with the problem because you don’t have conviction in your life."