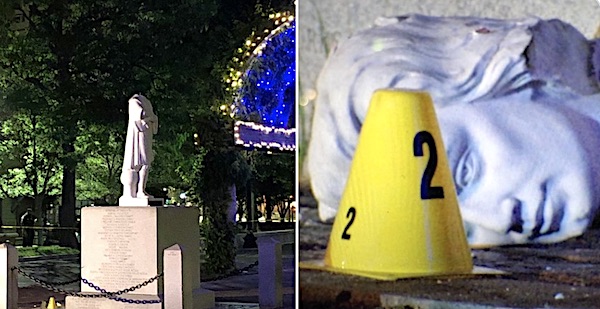 A statue of Christopher Columbus in Boston is defaced on June 9, 2020. (Twitter)

The Columbus statue in Richmond’s Byrd Park was toppled, set on fire, and thrown into a nearby lake, ABC affiliate WRIC News reported. The Boston statue, located in Christopher Columbus Park, was discovered decapitated Wednesday morning, according to Boston 25 News.

The Richmond statue is seen ablaze after it was torn down in a video of the incident posted by Bloomberg News to Twitter. The video then shows protesters dragging it into a lake and kicking it.

After protesters threw the statue into the lake, they allegedly attacked an Associated Press photographer, according to AP reporter Brent Solomon.

Protests have taken place across the country in recent weeks in response to the death of George Floyd. Floyd died in police custody May 25 after an officer kneeled on his neck, a video of the incident showed.

The Gen. Williams Carter Wickham statue in Richmond was defaced then toppled in Richmond last week. Democratic Gov. Ralph Northam announced last week that he would remove the statue of Gen. Robert E. Lee that stands in Richmond. However, a judge temporarily blocked the removal.