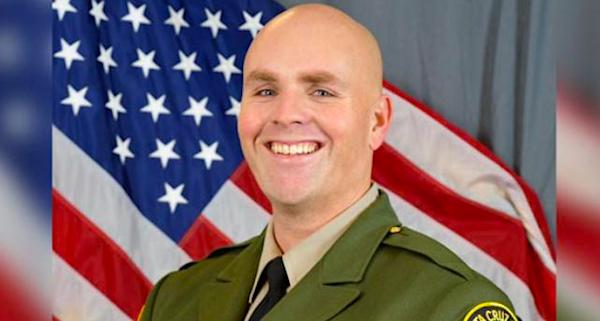 A Santa Cruz County sheriff’s deputy was killed and other officers were injured after a man who was stockpiling an arsenal of bombs and guns opened fire on them Saturday, according to local media reports.

Sgt. Damon Gutzwiller, 38, was fatally shot after officers while responding to reports of a suspicious van near Ben Lamond, California, Sheriff Jim Hart told reporters Saturday night, according to ABC7 News. The person who called in the report said they saw a cache of guns and bomb-making devices inside the van, according to Hart.

“Words cannot express the pain we feel for Damon and his family,” Hart said during a news conference, referring to Gutzwiller, who is survived by his wife and young child. “He was the kind of person we all hope to be. Today, we lost a hero. We are grateful to have known him and we mourn with his family.”

Gutzwiller and other officers followed the van and finally located it at a Ben Lamond home, Hart said. Carrillo allegedly ambushed the officers shortly afterward with home-made bombs and guns, according to Hart.

Gutzwiller was shot during and promptly transported to a hospital, where he was pronounced dead. A second deputy was hit by a car as the suspect, identified as Steven Carrillo, was allegedly fleeing the scene, according to the Santa Cruz Sentinel.

Carrillo, a 32 years-old and an active duty U.S. Air Force sergeant, was arrested and will face murder charges, among other felony counts, Hart said. Carrillo was treated at a hospital Saturday night after being shot with return fire during the shootout, ABC7 News reported.

According to an ABC7 News investigation, Carrillo posted a Facebook meme on May 31 in which he wrote: “I’ll never let racist white people make me forget about the dope white people I know exist. I love y’all.” The post included different colored fist emojis, with the white fists in the meme crossed out, the ABC7 investigation team reported.

Gutzwiller’s death came on the heels of nationwide protests following the death of George Floyd, a 46-year-old black man who died May 25 after a police officer knelt on his neck for several minutes, video of the incident shows. The police officer, Derek Chauvin, was immediately fired after the incident and faces second-degree murder and manslaughter charges.

Gutzwiller was shot and killed less than a week after retired St. Louis Police Department Captain David Dorn was fatally shot on June 2 trying to defend a local pawn from suspected looters. Dorn died in the middle of the street after suspected rioters shot him in the torso, reports show.