Democrat Nancy Pelosi is spearheading a national effort to implement what many critics label as "cheat by mail" as part of the proposed Heroes Act legislation crafted under her direction. The idea is to federalize state election processes under the pretext that 100,000 COVID-19 deaths demand that the safety of our citizens is guaranteed as the next election cycle approaches.

It seems a reasonable enough premise, right? After all, more than 100,000, according to how CDC counts the cases, are now dead. So why would the country not want Ms. Pelosi's bill to pass so that we can all be rescued from this clear and present danger?

Pelosi's @SpeakerPelosi Twitter page can give us a few insights as to whether the speaker's claims for the need for vote by mail are reasonable or not. She has tweeted some seven tweets over the past week that mention 100,000 coronavirus deaths. Pelosi repeatedly claims that COVID-19 is an imminent threat in these tweets and also claims "… this (voting) is now a health issue … now people have to choose between their health and their vote." The House speaker also makes repeated claims that communities of color are disproportionately affected by COVID-19.

But are these things true? And if they are true, are they stated in a disingenuous way intended to mislead?

Two things really pop out from Pelosi's recent tweets. First that she is fixated on the number 100,000 and is offering very little in the way of qualifying information that allows us to understand what the number really means. Second, what little qualifying information th she does provide isn't useful in understanding the true threat profile, nor her basis for claiming a need for vote by mail.

First, the numbers are telling us that voting in person will be no more dangerous than going to the grocery store exactly one time. In fact, voting will be less dangerous than said grocery run for the simple fact that social distancing rules will be more vigorously enforced at polling places than they are in the local grocery store. But let's get back to that number 100,000 and focus on it for a few more moments.

CDC numbers tell us that approximately 80% of the 100,000 COVID-19 fatalities Ms. Pelosi claims as her justification for national vote-by-mail are comprised of people age 65 and older, meaning that we have about 80,000 souls, according to how CDC counts the cases, who were age 65 or older when they passed from causes that included COVID-19 – which is a rate of .2% of their peers.

And while it is true that out of that 80,000, African Americans are over-represented by a factor similar to that community's over-representation in colorectal cancers, the important fact is that 73% of African American deaths that involve COVID-19 are age 65 and older. And like the greater population, this is happening at a rate of about .2% of their peers. But Pelosi withholds these important facts that can help us determine the true need or lack thereof for voting by mail.

As part of her rationale for universal vote by mail, Ms. Pelosi recently stated that Republicans enjoy success with the limited vote by mail that exists today. It's worthwhile to point out that if you're age 65 or older, which is the group that the numbers are telling has any discernible danger of voting in person, chances are you'd never support anything Pelosi is pushing because 1) statistics show that this age demographic is decidedly Republican, and 2) Democrats are on record stating they want to use the COVID-19 crisis to fundamentally transform America. And since 1) is true, this age group does not want to do 2).

But that political reality aside, perhaps in the spirit of compromise and more importantly, in recognition of what the numbers are actually telling us concerning any dangers of showing up at the polling stations, perhaps a bill could be crafted allowing those age 65 and older to vote by mail. After all, we wouldn't want our Republican-leaning seniors to become disenfranchised because of COVID-19, now would we?

Interestingly enough, some seven states already have such laws in place that provide for the protection of the elderly and allow them to vote by mail. What is the liberal response to this admittedly liberal and inclusive policy? Texas is now being sued by liberals for allowing it.

Ms. Pelosi has also stated in her tweets and videos that we must remember that the virus isn't taking a break, and that this is an important reason to support the Heroes Act and its vote-by-mail mandate. The following publicly available CDC data chart proves otherwise: 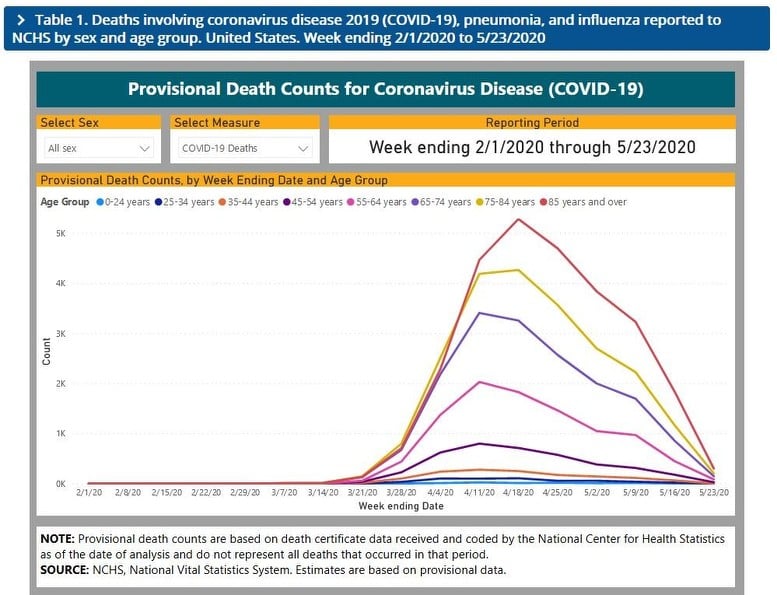 So, there you have it. A few numbers given their own voices that are telling us the truth about Pelosi's claim that COVID-19 justifies national vote-by-mail for all ages before November. And when we listen to the numbers instead of listening to Speaker Pelosi, the numbers are telling us that only Americans age 65 and older are at any discernable risk at all, something that is true for all racial demographics. The numbers are also telling us that what little risk does exist for ages 65 and older as well as all other age groups is evaporating rapidly.

As I stated earlier, maybe Republicans might perceive that offering Pelosi a compromise for older voters is possible, one that follows Texas' practice of protecting its (decidedly Republican) senior population. This is after all what the numbers are telling us makes sense if there is to be any form of vote by mail on a wider scale than already exists. But when we look at that chart above, maybe not.