Too many Americans, debilitated by so-called "white guilt," have largely become first-class cowards. Just call them racist and they run for the exits, usually stage left. To the contrary, black conservatives such as Candace Owens, Larry Elder and some of my brave clients, such as Dallas police Sgt. Demetrick Pennie, are courageous. A few years ago, Pennie sued so called Reverends Louis Farrakhan of the hateful Nation of Islam and Al Sharpton, as well as Black Lives Matter and the New Black Panthers Party, over the 2016 Dallas massacre of policemen.

The lives of Pennie and his family were then threatened, and he was called every vile name under the sun, from "Uncle Tom" to "House N." Candace Owens has of late received the same treatment when she correctly pointed out that George Floyd, the black man who was killed in Minneapolis, was not exactly a saint, but instead a five-time convicted felon, once for armed robbery. She expressed her disgust that so many in the black community would deify Floyd, when other minorities in the United States, such as the Jewish community, condemn their own for misdeeds.

But the real misdeeds, as has becoming increasingly evident in recent weeks, with the highly charged killing of Rayshard Brooks in Atlanta, center in the largely white community of the federal judiciary.

There is so much white guilt that has been propagated over time – in the modern era beginning with the election of Barack Obama as president – that it has become a pandemic in an of itself. Having stoked what is now a race war, now in full swing, Obama cleverly divided the races and in so doing embraced the likes of Farrakhan and Sharpton, giving them an annual membership into his White House Hall of Shame. These racist despots were no longer at the back of the bus, but instead driving American race-related policy, all the while shouting out the bus window to kill white cops in particular, when Jews, aka "Jew termites" as Farrakhan has put it, were not readily available to make targets.

Read what Farrakhan, whose proud smiling photograph with Obama was kept secret until recently, was spewing from his racist perch in the years, months and days before the Dallas massacre that left many of Sgt. Pennie's cop brothers dead and wounded. It thus was no coincidence that one of Farrakhan's Black Muslim Nation of Islam disciples, Micah Johnson, was ordered by this Hitleresque black high priest to carry out this heinous crime. 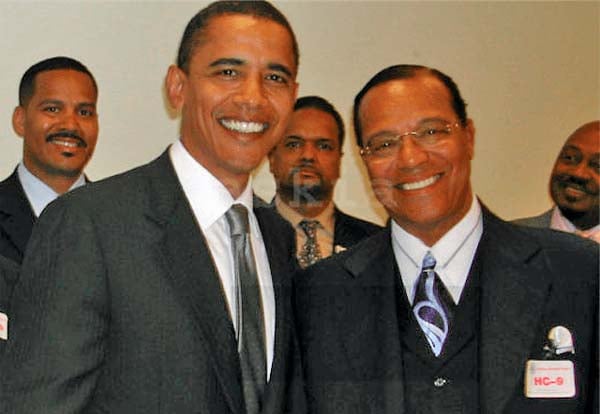 Here is what this murderous "reverend" directed to his followers like Johnson just hours before the Dallas massacre:

"When you are willing and not afraid anymore to pay the price for freedom – don't let this white man tell you that violence is wrong. … Every damn thing that he got, he got by being violent – killing people, raping, robbing and murdering. He's doing it as we speak, and then he has the nerve to come and tell us that violence and hatred won't get it. Don't buy that. … He is worthy to be hated. … God hates, and man is no better than God."

[The Blaze, "Hours Before Officers Were Gunned Down in Dallas, Farrakhan Posted This Shocking Message of Racism and Violence, " July 8, 2016.]

One of the Dallas cops who was killed was Patrick Zamarippa. His father, Enrique, retained me to file a wrongful death suit against Farrakhan and his Nation of Islam, as well as Sharpton, Black Lives Matter and the New Black Panthers Party, all of whom had joined Farrakhan in inciting violence against the police. The case, which was filed in the U.S. District Court for the Northern District of Texas, in Dallas, was assigned to a white female Trump appointee, Karen Gren Scholer. After considerable delay, Judge Scholer outrageously dismissed the complaint, incredibly ruling:

"Zamarippa attempts to hold Defendants liable because Johnson allegedly was one of their 'disciples.' … Zamarippa's allegations against Farrakhan and the NOI (Nation of Islam) … are wholly conclusory and fail to reasonably trace the words and actions of (Farrakhan and NOI) to the death of Zamarippa's son. … Zamarippa fails to explain how the injury at hand resulted from anything other than 'the independent action of Johnson.' … Here, other than conclusory statements, Zamarippa has not pleaded any facts to suggest that Johnson's conduct was dependent on or incentivized by Farrakhan or the NOI." (July 16, 2018)

To the contrary, Judge Scholer, our complaint was exceedingly detailed and can be found at www.larryklayman.com. It directly tied Farrakhan and the Nation of Islam to the murder of Patrick Zamarippa.

So there you have it. Despite excruciating detail in the Zamarippa complaint, a Trump appointee no less, goes through the monkey business of "hearing no evil, seeing no evil and doing no evil," and, perhaps out of fear or white guilt, trashed the case of my client, the grieving father of slain officer Patrick Zamarippa.

The lesson of this sad and despicable abdication of federal judicial duty is twofold.

First, peoples of all races, including white federal judges, must not cower from the rule of law; otherwise a license to kill will in effect be granted to the race baiters, conmen and other radicals that are, as we speak, in the act of occupying, looting, maiming and killing in our nation's streets.

The second lesson is for President Trump, who just this week was betrayed yet again by a phony conservative chief justice, John Roberts, of the Supreme Court, who along with the leftist justices, ruled against The Donald's DACA policies. In response, Trump promised, if reelected, to appoint truly conservative justices when vacancies come due. But from my experience, as I have written about in previous columns, the majority of his white and non-white appointees to not just SCOTUS, but the lower federal courts, have been clones of Judge Scholer – totally lacking in courage.

The time has come for We the People to peacefully and legally take matters into our own hands, as our government and its judicial branch have become completely compromised and corrupt. They are no longer the protectors of the citizenry, but the tyrants who are aiding and abetting the destruction of our nation.

Join Freedom Watch's Justice League to help save the nation! Go to www.freedomwatchusa.org and sign up.