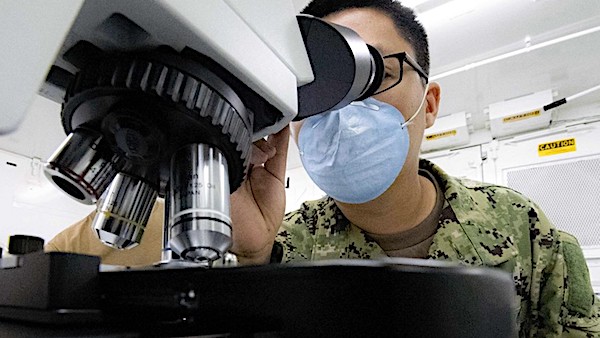 As I have documented previously, the Democratic Party engages in wild projection – literally accusing others of the very sins they themselves are guilty of – in pretty much every area of life and public policy. That includes science, despite its claim of being “the party of science.” Consider:

Today’s Democratic Party insists that a beautiful, full-term human baby just about to be born isn’t really a human being and therefore can be slaughtered at will – maybe even after he or she is born – just as long as “the mother and her doctor” agree.

The modern Democratic Party likewise contends there are dozens of different genders that never before existed throughout history, that men can menstruate, get pregnant and have babies, and that if you don’t agree with all this, you’re a deplorable bigot. And anti-science.

Yes, these are the people who proudly identify themselves as “the party of science” and contemptuously dismiss critics and political opponents as “science-deniers” or “climate-deniers,” people who refuse to “listen to the scientists” and “follow the data.”

Meanwhile, cable TV anchors and pundits posing as epidemiologists and immunologists have angrily denounced the drug hydroxychloroquine as extremely dangerous, even though the FDA has ruled it safe for the last half-century. Why do they condemn a medication already being used effectively on COVID-19 patients worldwide and which many frontline physicians themselves take prophylactically, especially at a time when the world is desperate for effective therapies that might help those infected with coronavirus? For one reason only: Because President Donald J. Trump, whom the left detests and lives to destroy, has spoken approvingly about it and even took a two-week regimen of the medication under the guidance of his White House doctor.

Truth check: There is no more unscientific – indeed, anti-science – major political movement in American history than today’s Democratic Party. Let’s find out why.

Science is a search for truth and genuine knowledge. Indeed, the word “science,” from the Latin scientia, literally means “knowledge.” The research findings reached by a real scientist may not be what he anticipated; they may even uncomfortably challenge his assumptions and personal convictions. But no matter, because all that counts for a real scientist is discovering what is actually true and factual.

This is literally the exact opposite of what animates the left, whose worldview has come to possess today’s Democratic Party. As author and talk host Dennis Prager puts it, “Truth is not a left-wing value.”

By its very nature, the left does not care about objective truth or the lessons of history or the laws of economics or understanding human nature or God or biblical morality or respecting individual God-given rights. Rather, the left is messianically obsessed with ignoring all this, playing god and radically transforming society into a utopia that exists only in their imagination.

As revered economist Thomas Sowell recently said, “Socialism is a wonderful-sounding idea. It is only as a reality that it is disastrous."

Socialism fails because it can be implemented only by brute force, by enslaving populations and looting their wealth, and by ignoring the accumulated knowledge and hard-won lessons mankind has learned at the cost of great suffering.

Today, in mid-2020, with legions of leftist revolutionaries literally trying to tear America apart, burn it down and loot its wealth, let’s rewind the whole socialist utopia enterprise back to its beginning for just a minute, because a gem of understanding can be found there.

Karl Marx and Friedrich Engels, who gave the world Marxism and penned “The Communist Manifesto,” presented their brainchild to the world as scientific. In fact, one of the key names for their disastrous economic, social and governmental system was “scientific socialism.”

Yet, based on the sheer death toll of over 100 million souls in the 20th century, Marxism has proven to be the world’s most dangerous, misguided, truth-and-knowledge-denying, and therefore profoundly unscientific ideological and economic system.

What’s most amazing is that Engels’ assertion that socialism is a “science” came at virtually the same time, in the mid-1800s, as Charles Darwin was turning the field of biology upside down with his theory of evolution. Indeed, Marx and Engels regarded Darwin’s radical new paradigm of biology as a prerequisite for understanding the new science of socialism.

Why would that be?

Very simply, because both Marxism and “macroevolution” (Darwin’s revolutionary theory that entirely new species develop over time through natural selection) revolve around, and utterly depend upon, the pretense that God does not exist. If honeybees, butterflies, horses and humans evolved from slime through random mutation and nothing more – and likewise, if God’s moral laws of life and His divine plan for the redemption of mankind are just superstitious relics of ignorant ages past – then both evolution and socialism could plausibly be said to represent an enlightened, “scientific” basis for life.

Their problem is that there actually is a Creator God, Whose laws – physical, metaphysical, moral, spiritual – govern the universe, including human life on earth.

In truth, today’s leftwing Democratic Party sees itself as championing science because, having abandoned the religious and moral underpinnings of Western Judeo-Christian civilization, their professed faith in secular “science” provides the only refuge for those whose mission revolves around undermining that very civilization. Without a divine Creator in their worldview, the only option left for explaining the universe’s existence and the extraordinary variety, vibrancy, complexity and wonder of life on earth is reliance on a secular nontheistic explanation – which they perfume with the label “science.”

But it is an atheistic, rebellious impulse, not a love of truth and genuine knowledge, that leads today’s delusion-loving leftists to cling to the idea, if not the reality, that they “follow the science” while laboring to undermine the Author of Science.

Genuine science and its offspring, technology, have of course blessed the whole world in many areas of life. But that’s not what attracts the left. Rather, it is the weaponization of science as a means of fomenting the transformation of the society they hate, while at the same time “science” provides them a convenient cover, a safe haven, away from the realm of God and His life-giving precepts and laws.

The left vainly hopes that ultimately it will be able, while ignoring both God’s wisdom and the accumulated lessons mankind has learned through history, to somehow finally establish their dreamed-of utopia. But their paradise will inevitably become a place where individuals’ sacred God-given rights to life, liberty and property fall by the wayside, where crushing poverty prevails, where oil, gas and coal are outlawed, where infanticide is celebrated, and where men have babies – but where the deranged left is in charge of everything.

All in the name of science. 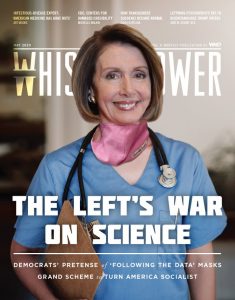 Important note: The preceding is the lead-off story in the current issue of Whistleblower magazine, edited monthly by David Kupelian. The issue is titled “THE LEFT’S WAR ON SCIENCE: Democrats’ pretense of ‘following the data’ masks a grand scheme to turn America socialist,” and is also available in state-of-the-art digital form. Better yet, SUBSCRIBE TO WHISTLEBLOWER (print edition) and get 12 fantastic issues or else get an ANNUAL DIGITAL SUBSCRIPTION.