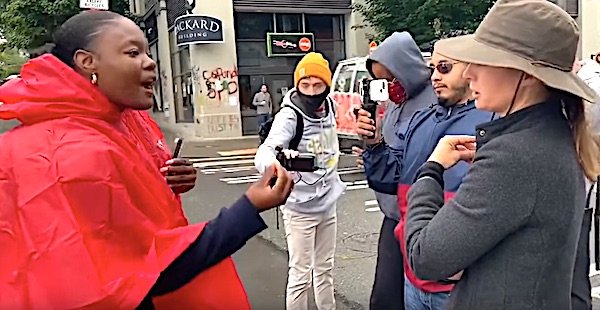 The Democratic Party hates black people, and if Joe Biden is elected president, black men would be killed in substantially greater numbers than ever before, according to a black conservative woman caught in a stunning video educating a white liberal woman in Seattle.

"These Democrats – and I'm sorry to say this. I'm not trying to be racist, but they hate black people," said the woman, identified by radio host Rush Limbaugh as Beverly Beatty.

Beatty told the unidentified leftist woman that she understands some people don't like President Donald Trump.

Limbaugh commented on Beatty's bravery, saying, "She's fearless, she is confident, and she's taking it to a bunch of white females. You can just see the arrogance and the condescension dripping off of them. They don't know what to do with this! They've never heard an African-American man or woman speak like this. They don't know what to do. This woman that Beverly Beatty is talking to, literally has no idea what to do.

"She just sits there and kind of nods her head. I guarantee you this white progressive woman is hearing this stuff for the first time in her life, and she hasn't the slightest idea how to process it because none of it comports with what her worldview is of African life in America and how African-Americans view politics."

The conversation between Beatty and the liberal woman continued:

BEATTY: Blacks freed? The Republican Party is the only party that the black people actually assisted in finding. But all of that history has been torn away. People say, "Oh, there was a big switch." There was never a big switch. The Union… The Union won because we had grown in the industrial area – era.

So we were able to get trains and get supplies back to our soldiers while the Confederates was still riding horses. They were not able to get supplies back fast enough, right? So what happened was slavery was abolished and the South – the people in the South – could no longer make their money from slaves. They had to move to the North to work in the industry to produce.

WHITE LIBERAL WOMAN: No, we're not.

BEATTY: Black women marry their husbands and respect their husbands. That's where we are. We not on this, "Oh, I – I do what I want." We don't do that.

BEATTY: That's not our community. And you would understand, I know you understand what I'm saying.

BEATTY: We don't do that. But yet these people are hijacking our movement. And the Democratic Party, they're trying to hijack us as well. No!

Limbaugh admitted he was curious about one thing after hearing Beatty's staunch conservative viewpoint.

"And she has obviously become proficient in not just explaining it, but selling it. But the cultural things that she hit this woman with. 'How did Black Lives Matter turn into something about LGBTQ? Blacks don't support any of that,' and they don't, and they never have."

Online comments about the video include: