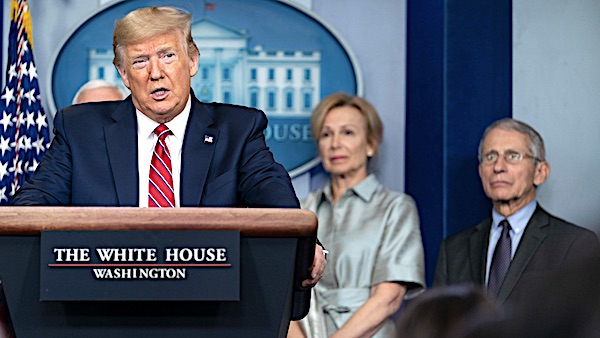 The politicization of the COVID-19 treatment promoted by President Trump, hydroxychloroquine, has taken another dramatic turn with a premiere medical journal's retraction of a widely reported study that led to the shutdown of major clinical trials.

Establishment media seized on a study by The Lancet concluding the commonly used anti-malarial drug hydroxychloroquine increased the risk of death in COVID-19 patients.

But the journal has pulled the study, and three of the four authors have issued an apology, citing concerns about the quality and veracity of its data. The World Health Organization, which paused its trials in response to the study, will resume them, and dozens of other trials have resumed as well, Reuters reported.

The Lancet study's fatal flaws were immediately apparent to Dr. Stephen M. Smith, an infectious-disease specialist trained as a researcher under Dr. Anthony Fauci who briefed President Trump in April on the safety and effectiveness of hydroxychloroquine.

Smith, who has been successfully treating COVID-19 patients in his New Jersey clinic with protocols of hydroxychloroquine and azithromycin, spelled out some of the study's crucial errors in a May 22 interview with WND.

The three authors of The Lancet study who have apologized – Mandeep R Mehra, Frank Ruschitzka and Amit N Patel – said Surgisphere, the company that provided the data, refused to transfer the dataset for an independent review and the researchers "can no longer vouch for the veracity of the primary data sources."

A study in the New England Journal of Medicine that also used Surgisphere data was retracted for the same reason.

The authors of The Lancet study said they "entered this collaboration to contribute in good faith and at a time of great need during the COVID-19 pandemic."

"We deeply apologise to you, the editors, and the journal readership for any embarrassment or inconvenience that this may have caused."

He also noted that doctors at the University of Pittsburgh Medical Center said Thursday the coronavirus appears to be declining both in virulence and in its infection rate. He has heard the same from doctors in northern Italy and in New York City over the past couple of weeks.

The novel coronavirus could be mellowing, he said, because "viruses, like anything else, want to survive."

"Now, I'm not sure yet that this is the case, but as viruses mutate over time, they want to get more used to the human host. They want to be able to spread more easily," Siegel said. "And if they kill the host, they can't spread. So they tend to mutate in the direction of becoming milder. It looks like this may be happening here."

In an interview with WND on May 20, Smith expressed his frustration with the politicization of hydroxychlorquine and the disconnect between the scientific data and the statements of scientists, media and politicians who have access to that data.

On May 22, the New York City-area hospital where he has admitting privileges informed him he would no longer be allowed to prescribe hydroxycloroquine to patients unless done in a clinical trial.

In the May 22 interview with WND, Smith noted the Lancet study of nearly 100,000 coronavirus patients concluded there was no benefit in treating them with hydroxychloroquine and its more toxic cousin, chloroquine, and even increased the likelihood of them dying in hospital.

But he asked why the majority of patients studied had been admitted to the hospital when the vast majority were not hypoxic, a condition in which the body is deprived of oxygen, and had a normal qSOFA score. The latter typically measures organ function during a stay in an intensive care unit.