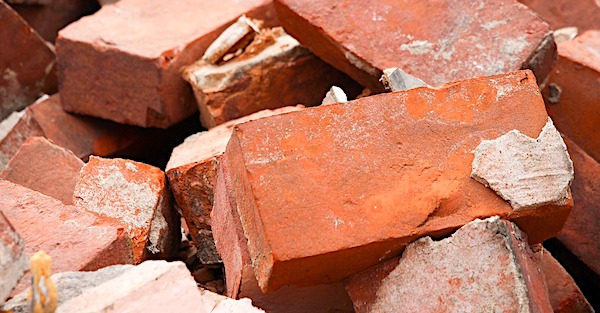 Leave it exactly as you found it.

This is a message every parent knows. When your children throw a tantrum and wreck their rooms by tossing books, games and clothes everywhere (but oddly enough not their PlayStation or Xbox), you don’t sanction their immature behavior by picking up after them. It’s their mess and they need to live with it until they recognize the error of their ways. If you want to speed up enlightenment, take away the video game system and make its return contingent on results.

If the grown-ups in America took the same approach to the spoiled brats who have hijacked our major cities, we might well see a rapid learning curve as the mayhem sown by looters and rioters were left to fester and rot as a visible consequence of lawlessness.

Of course, this could only occur if adults were standing up for themselves and their culture instead of kneeling in obeisance to the extremist mob. Rather than talking about consequences, Democrat mayors and governors are rushing to sweep the riots under the rug, pretending they never happened or branding them as “peaceful protests.”

It should go without saying that the looting and rioting we witnessed recently was not justified by the death of George Floyd. Nowhere in the legal code does it say that one unlawful act can provide an excuse for other unlawful acts. Anyone who picked up a brick and chucked it through a window, anyone who torched a police car, anyone who stole a big-screen TV — anyone who engaged in lawless behavior because George Floyd died a wrongful death is a criminal, not a hero. Their behavior cannot be sanctioned, nor should it be covered up.

In fact, it should be memorialized — at least temporarily — like the chalk outline of a dead body on the sidewalk after a murder. If radicals want to destroy Western civilization, let their responsibility be emblazoned on every damaged building, in every burned-out car, in every closed business, in every toppled monument to the past, which they neither understand nor deserve.

Leave all the monuments defaced so that everyone can see once and for all what these revolutionaries value and what they hate. Keep the ugly scrawl of “Yall not tired yet?” on the Lincoln Memorial — a sacred monument built to honor the president who freed the slaves. Keep the childish orange spray paint on the statue of Mahatma Gandhi, the spiritual inspiration for Martin Luther King Jr.’s truly peaceful protests to ensure civil rights for all Americans.

Let the cartoonish piggy face and the BLM logo remain forever on the Kościuszko Monument at Lafayette Park opposite the White House to remind everyone that the protesters are mindless and malicious. Gen. Tadeusz Kościuszko had volunteered to fight for America's independence in the Revolutionary War and played a crucial role in securing our nation’s liberty. Moreover, this Polish hero fought for the African slaves whom the Constitution had forgotten and willed that his American assets be used to purchase the freedom of black slaves. Though the will was disputed and never executed on behalf of those whom it was intended to assist, Thomas Jefferson was no doubt correct when he declared that Kościuszko was “as pure a son of liberty as I have ever known.”

As we enter a new Dark Age, let the library in Santa Monica, Calif., remain a monument to fear and illogic as patrons are greeted with the fascist motto “Save a Life, Kill a Cop.” But make the left live up to its book of rules. Let’s go ahead and defund the police in every city where the mob has taken control — not because it’s a good idea but because it’s the only way for the spoiled brats to learn just how important police are. Hell, the police ought to be quitting in droves after what they have been subjected to in recent weeks. That will give the weak-kneed mayors and revolutionary city councils just what they deserve — chaos. How long will it take before the black and brown — and yes, white — residents of those cities demand a return to normalcy? Maybe we will find out in Seattle, where a seven-block zone has been ceded to the anarchists.

In the meantime, let the skateboard — which was the ubiquitous weapon of choice for looters breaking windows — become the symbol of our new reign of terror just as the guillotine is the lasting symbol of the French Revolution. Build statues of Antifa thugs crashing through the windows of CNN in Atlanta, burning a church in D.C., and destroying a police station in Minneapolis. Celebrate what America has become until the pendulum swings again and those new statues are themselves toppled when sanity prevails.

Of course, it may take a while — not months or years, but decades. To pretend we are not living in a revolutionary era is to ignore history. The left controls the institutions of our society. They control speech. They control schools. They control the media. The Soviet Union suffered under the Dictatorship of the Proletariat for seven decades before enjoying a partial return to sanity in the late 1980s. There is no reason to think the United States will get off any easier. The Dictatorship of the Politically Correct is ascendant. Under the guiding hand of Commissar Alexandria Ocasio-Cortez and Black Lives Matter, the radical left will cleanse dissident voices, impose a regime of absolute obedience and collect tribute from the corporate elites who owe their safety to those who control the mob.

Of course, none of what I propose will come to pass. There will be no adults in the room laying down the law and telling the rowdy children about consequences. Instead the enablers will make excuses, sweep up the streets, and spend billions of dollars of taxpayer money to put a Band-Aid on the socially reprehensible behavior of the social-justice warriors. Most corporations like Walmart and Target will just expense their losses and start over.

How much better it would be if the federal government were to pass a bill funding businesses that opted to stay closed following the riots. Think of it as the equivalent of those Department of Agriculture subsidies given to farmers who agree not to plant certain crops. If Democratic-led cities had to suffer a season or two without banks, grocery stores, department stores and pawn shops, maybe they would begin to repent for their short-sighted attacks on their own infrastructure. Probably not, but at least it sends a strong signal.

Of course, that kind of policy would never be approved by our dysfunctional Congress, but that shouldn’t stop businesses from taking action on their own. Just like Brandon Straka started a movement to #WalkAway from the Democrat Party, business leaders as well as the police would be wise to walk away from Democrat cities. In the immortal words of President Trump, “What the hell do they have to lose?”

Frank Miele, the retired editor of the Daily Inter Lake in Kalispell Mont., is a columnist for RealClearPolitics. His books — including “The Media Matrix: What If Everything You Know Is Fake?” — are available from his Amazon author page. Visit him at HeartlandDiaryUSA.com to read his daily commentary or follow him on Facebook @HeartlandDiaryUSA or on Twitter @HeartlandDiary.

WND News Services
These reports are produced by another news agency, and the editors of WND believe you'll find it of interest.
Zoo will let you name a cockroach after an ex, feed it to an animal
AI less likely to flag 'hate' if whites and Republicans are targeted, research shows
Ranchers warn disease that would 'decimate' cattle industry could cross southern border
Charges filed against woman for praying silently are dropped
Now schools teaching children 'speciesism'
See more...