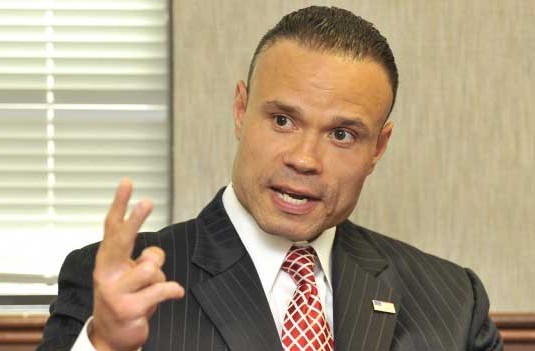 The violence across the nation in response to the death of George Floyd in Minneapolis is not merely an expression of outrage against an injustice, contends former Secret Service agent Dan Bongino.

It is a "very sophisticated" tactic being used to pursue an "insurrection."

"Don't you understand what is going on right now?" he asked in an interview Monday with "Fox & Friends."

"This is not about George Floyd anymore. Gosh, I wish it was. We had a sincere moment of national unity where everyone agreed, even our police officers, that this was abhorrent.

"Who is talking about that now? What's the answer? Nobody. We're talking about an insurrection. This is not a joke, this has to stop now. ... They need to get a lid on this state, or this is not gonna end well."

His comments came in the wake of President Trump tweeting Sunday that he wants to declare the far-left group Antifa a domestic terror organization.

"They're lifting and shifting, and moving around trying to hit strategic points at the White House," he said.

But he warned it's not "some run-of-the-mill criminality by people who have nothing to do on a Saturday night."

"This is a sophisticated insurrection-type attack," Bongino said.

Over the weekend, more than 50 Secret Service agents were injured in violent protests just outside White House. Many of the injuries were from rioters throwing bottles. But police also reported finding cars in the area planted with incendiary material.

"We need a high-profile, FBI arrest right now. We need full mobilization of our national guards in every state," he said. "I don't care if you're in Wyoming or downtown Miami. We have to shut this down now."

Barr has has called the violence "domestic terrorism," warning that offenders will be treated "accordingly."

CNN cited current and former government officials saying it would be unconstitutional for the government "to proscribe First Amendment-protected activity inside the US based on simple ideology, noting the law allows terrorist designations for foreign groups that don't have those protections.

Regardless of legality of any terror designation, there is no First Amendment protection for arson, looting and other violence.

CNN said Antifa, "short for anti-fascists, describes a broad group of people whose political beliefs lean toward the left -- often the far left -- but do not conform with the Democratic Party platform."

Some members of antifa, CNN acknowledged, "employ radical or militant tactics to get out their messages."

"I hereby declare, officially, my support for ANTIFA," he wrote Sunday on Twitter. "Unless someone can prove to me ANTIFA is behind the burning of black and immigrant owned businesses in my ward, I’ll keep focusing on stopping the white power terrorist THE (sic) ARE ACTUALLY ATTACKING US!”

Minnesota Gov. Tim Walz mobilized the National Guard over the weekend, contending "white supremacists" and "cartels" bore some of the blame for the violence, without naming any groups.

"Now we’re seeing bad actors come and distract and the president even noted that the majority that goes out here are peaceful people, but you have these anarchists that are paid to do a job," Jones said.

Jones reported seeing a video of antifa members being told to "stop destroying the businesses" and responding, "They’re going to kill you anyway."

Slate contended Trump cannot designated antifa as a terrorist group since "they are neither terrorists nor an organization."

The report called antifa "a loose collection of individuals and groups that engage in aggressive mobilization against far-right extremist movements, especially violent white supremacists. Within antifa there are also anarchists, a portion of whom descend on protests to engage in vandalism and violence, with the overall goal of destruction and destabilization."

Slate explained that current policy for designating terrorist organizations doesn't allow for the naming of a group that operates in the U.S. without "any organizational cohesion."

Politico took a similar stance: "First, [the president] doesn’t appear to have the legal authority to do so. And second, it’s by no means clear the loosely defined group of radical activists is an organization at all."