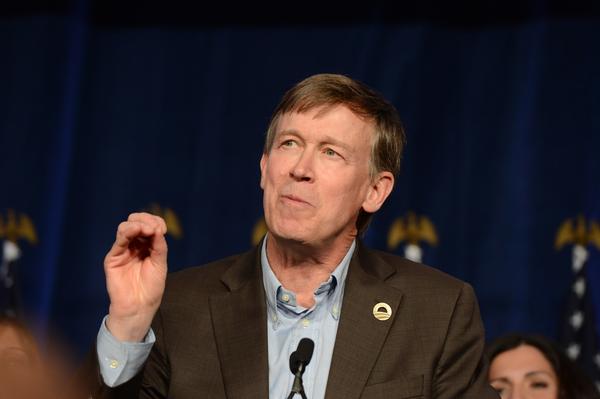 The decision stemmed from his acceptance of flights on private jets while he was governor in violation of state law.

The Colorado Sun reported Hickenlooper took a flight on a corporate jet owned by a political activist and accepted a ride in a Maserati limousine while at a conference in Italy.

The Colorado Independent Ethics Commission found four other incidents investigated were not violations.

The case was the highest profile ethics trial since voters approved the ban in 2006, and it didn't go smoothly.

Hickenlooper had refused to testify before the state panel and only appeared after being held in contempt.

A hearing on sanctions against the former governor was scheduled June 12.

"If we allow this kind of special privately financed treatment for elected officials, it just accentuates the cynicism in the public that led to Amendment 41," explained Bill Leone, a former U.S. attorney and a member of the commission.

Hickenlooper is campaigning to be the Democratic nominee for the U.S. Senate seat held by Republican Sen. Cory Gardner. The primary vote is June 30.

The complaint against Hickenlooper was launched by the Public Trust Institute.

After first having refused to to appear before the commission, he contended his acceptance of the gifts was part of his effort to bring economic development to Colorado.

Hickinlooper rode on a private plane owned by Colorado homebuilder MDC Holdings to the commissioning of the Navy's USS Colorado submarine in 2018.

The commission decided, 4-1, that the plane ride violated the limits for gifts set by voters.

The other violation, by unanimous vote, concerned Hickenlooper’s travel to the exclusive Bilderberg meetings in Turin, Italy.

The Sun report said Hickenlooper was photographed on the trip riding in a Maserati limousine to the airport.

While other charges were rejected, the commission felt uneasy about his consenting to the travel, the report said.

KDVR-TV in Denver reported Colorado law, at the time of the infractions, banned gifts worth more than $59 to elected officials.