The Supreme Court is poised to hand down a ruling regarding state K-12 tuition assistance programs that could have major implications, particularly for lower-income Americans who want their children to attend religious or other non-public schools.

The case centers on a law passed in 2015 that allows Montanans to receive a $150 tax credit for donations made to private scholarship organizations.

The organizations then turn around and award scholarships to those who apply, who often are from lower-income families.

The amounts vary, but can equal part or all the cost of a full year of tuition at the private school of the recipient's choice.

Eighteen states have various forms of tax-credit scholarship programs, according to EdChoice.

The Montana law allowed parents to choose any private school to apply the scholarship toward, including religious schools.

Shortly after the legislation was enacted the Montana Department of Revenue put in place an administrative rule that precluded scholarship recipients from using "their scholarships at religious schools," according to the Supreme Court petition. (Page 6.)

The department relied on the Montana constitution's so-called "Blaine amendment," which prohibits, “direct or indirect appropriation or payment from any public fund or monies . . . for any sectarian purpose or to aid any church, school, academy, seminary, college, university, or other literary or scientific institution, controlled in whole or in part by any church, sect, or denomination.”

The Arlington, Virginia-based libertarian group Institute for Justice is representing school choice activist Kendra Espinoza and the other plaintiffs in the case. In a YouTube video produced by the institute, counsel Erica Smith explained that 37 states have Blaine amendments.

However, of those about 14 have ones "that are actively standing in the way of school choice," because of how they have been interpreted by courts in those states, she said at about the 10-minute mark of the video.

In an interview with The Western Journal, David Hodges, a co-counsel on the Espinoza case, said the issue is parental choice.

"This case is about whether the religion clauses [like those found in Blaine amendments]...can invalidate generally available and religiously neutral student aid programs, just because the program gave the choice of attending a religious school," David Hodges, a co-counsel in the Espinoza case with the Institute for Justice, told The Western Journal.

Blaine amendments were put in place in states starting in the late 1800s, after a drive led by then-Rep. James Blaine of Maine to amend the Constitution at the national level fell short.

The amendments were understood as a way to block tax dollars from going toward Catholic schools.

"Consideration of the amendment arose at a time of pervasive hostility to the Catholic Church and to Catholics in general, and it was an open secret that ‘sectarian’ was code for ‘Catholic,’” Justice Clarence Thomas wrote in a 2000 case before the Supreme Court.  (Page 828 of Thomas' opinion.)

Espinoza and the other plaintiffs in the case now before the high court wanted to apply their scholarship toward tuition at the Stillwater Christian School, a nondenominational school in Kalispell, Montana.

They won at the trial level.

The Department of Revenue appealed the case to the Montana Supreme Court, which overturned the trial court in December 2018, finding the scholarship program does violate the state's Blaine amendment.

Espinoza, a single mother with two daughters, appealed her case to the U.S. Supreme Court, which is expected to issue a ruling by June.

If she prevails, the result would be that "when a state seeks to establish a generally available scholarship benefit, that no state will be able to rely on one of their Blaine amendments to invalidate these programs" for religious schools, Hodges said.

The Institute for Justice video about the case is below.

"School choice is very important to me," Espinoza said at the video's opening. "I feel it is my responsibility and my right to be able to choose where my children go to school, where they learn and how they are educated and the influences that they have."

Former Rep. Trent Franks of Arizona is someone watching the case with great interest.

Franks, a former member of the Arizona House of Representatives and the United States Congress, was the original author and leading proponent of the successful passage of the Tuition Tax Credit Bill in Arizona in the 1990s.

The Grand Canyon State was the first to establish such a tuition assistance program and other states, like Montana, have since followed the model, KJZZ reported.

Franks explained to The Western Journal the advantage of the tax credit program is that it does not direct money from the treasury to religious schools, and therefore, in Arizona, has not been interpreted to be a violation of the state's Blaine Amendment.

The way it works is individuals can contribute up to $500 to School Tuitions Organizations, known as STOs, and then deduct that from their Arizona tax liability.

Franks argued the money in question never became public money, because like other deductions and credits, it is used to calculate the individual's tax liability to the state.

He offered the example of tax deductions made to churches or other charitable organizations.

“You made that donation before you ever filled out your tax return," Franks said. "Then you go and fill out your tax return two months later. And you show that as a deduction, does the money that you gave to that church all of the sudden become public money?"

The answer is no, according to Franks.

"If it does, then every dollar in your pocket is public money, because there's potentially some demand or some claim on it by the government at some tax level."

Former Arizona state Sen. Steven Yarbrough currently is the director of the Arizona Christian School Tuition Organization, one of the oldest and largest in the state. There are over 60 STOs in Arizona, religious and non-religious alike, Yarbrough said.

Since its inception in 1998, ACSTO has awarded over $240 million in scholarships to 38,000 students, attending 150 Christian schools throughout the Grand Canyon State, according to the organization's website.

"We believe that the evidence is clear that there are large numbers of students who are only able to afford a form of education that is preferred by their parents as a result of scholarship tax credits," Yarbrough told The Western Journal.

Liz Cuhna is one of the parents who would not be able to afford to send her children to a Christian school, but for the ACSTO scholarships.

Cuhna wasn't happy with some of the things she's seen regarding some of her older kids' experiences in public schools.

"We are a faith-based family and I thought that was really important that they could mimic that in their education," she said.

"You see kids from all economic backgrounds going to Valley Christian," she said. The scholarship program, she said, "is an equalizer."

Valley Christian Track & Field has combined to win 31 state championships since 1985 - the most of any Arizona high school. pic.twitter.com/MJx4ULAzG2

Susie Staub, whose daughters attended Valley Christian, recalled it was the school's principal who told her about ACSTO program after their family experienced a job loss and thought they would have to pull their kids from the school.

"We’re so grateful that we had that opportunity to choose the school that our children will go to, so that it would match up with our values," she said. "We just really believe in our family that having school choice is so important, and it's really a choice that a parent should make. That tax credit scholarship program allows that choice to happen for a lot of families in Arizona."

Sara Cornell, whose young son wasn't being challenged enough in public school, told The Western Journal, “There is no way we could afford private education without tax credits."

Chelsea Oglebay and her sister both received ACSTO scholarships throughout their school years at Pusch Ridge Christian Academy in Tucson.

In an interview with The Western Journal, she recounted how her mother almost made a full-time job out of lining up donors to give to ACSTO, so her children's entire tuition was covered. 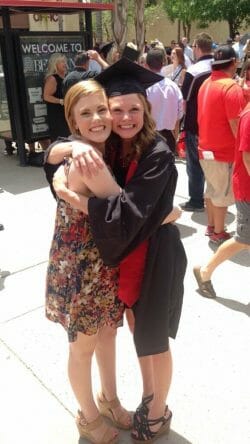 Donors can earmark their contributions to certain individuals or schools, which the ACSTO scholarship awards committee takes into account.

"Because of the tax credit program, we were able to be at a Christian school," Oglebay said. "That is what was best for us, and it’s shaped us into who we are now and where we're at now, and I think our stories would be very different if we didn’t go to a Christian school."

She believes so much in the mission of ACSTO that she recently took at job with the organization as creative manager.

"I’m just thrilled to be able to make that full circle," she explained.

Franks hopes the Supreme Court will rule in Espinoza's favor, saying it will allow many more to have school choices available to them.

“When this concept first occurred to me now 25 years ago, I prayed it could chart a new course in America to empower parents in their children’s education academically, philosophically, and spiritually," he wrote in an email to The Western Journal.

"If the Supreme Court decides for the plaintiff in Espinoza, as I believe they will, it will open the path for millions of children to walk in the hopes and dreams of their parents rather than in the politically correct corridors of bureaucrats," he added.

"This victory will have a huge impact on school choice nationwide," she said in the institute's video.

"It will wipe away the laws in states that still discriminate against religious options in school choice programs, and it will also enable legislators in many states to pass new programs."

CORRECTION, May 11, 2020: The original version of this article incorrectly identified the 19th-century congressman for whom the so-called "Blaine amendments" are named. He was Rep. James Blaine of Maine. We apologize to our readers for the error, and for any confusion we may have caused.