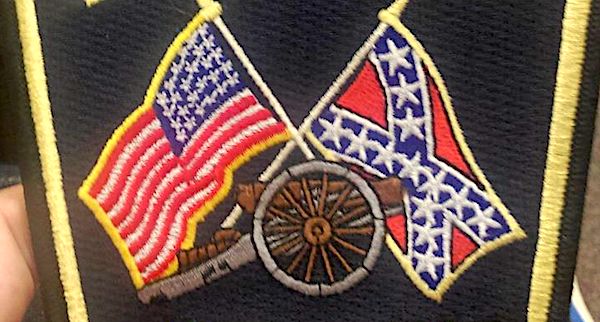 An American and Confederate flag appear on the logo of police in Gettysburg, South Dakota. (courtesy photo)

Many law-enforcement policies across the nation already are under review in response to the death of George Floyd in police custody in Minneapolis.

Now, a police logo is a small South Dakota town has been targeted.

The Rapid City Journal reported an uncle of George Floyd, Selwyn Jones, is calling on the police department of Gettysburg, South Dakota, to remove the image of a Confederate flag from its logo.

This week, NASCAR banned the Confederate flag from racetracks.

"I'm a crusader for change," Jones, a hotel owner who recently joined a memorial walk in Rapid City honoring his relative's life, said in the Journal report.

"I'll see if we can figure out a way to make a change in that. It will change," he said.

The newspaper said statues of Confederate leaders also have been targeted for removal because of the belief that they glorify white supremacy and memorialize a government founded on an effort to preserve slavery.

According to the Journal, Republican Gov. Kristi Noem and Rapid City Mayor Steve Allender have been critical of the emblem. But Gettysburg Mayor Bill Wuttke says it's about "heritage" not race.

The logo, creating in 2009, shows the U.S. and Confederate flags overlapping. Wuttke explains the town was founded in 1883 by veterans from both the Confederate and Union sides of the Civil War.

He asked, "Do we not have our right to be able to display what we feel is our freedom?"