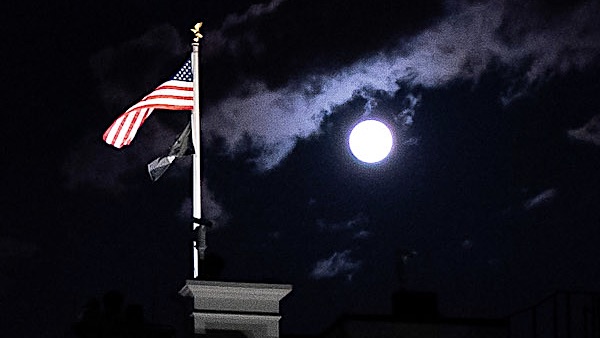 The Full Pink Moon, the largest full moon of 2020, rises above the North Portico of the White House Tuesday, April 7, 2020, in Washington, D.C. (Official White House photo by Tia Dufour)

House Democrats announced Tuesday evening that they will hold a vote June 26 on making the District of Columbia the 51st state.

Over 200 Democrats have signed on to the legislation amid nationwide protests that have consumed Washington, D.C. over the past few weeks, pitting the district’s Democratic Mayor, Muriel Bowser, against President Donald Trump over the best response.

The response to protests in D.C. over the killing of George Floyd have led prominent Democrats to criticize the fact that the district has no voting representation in Congress and call for its residents to be granted the same rights as Americans who reside in the 50 states, The New York Times reported late Tuesday.

Despite being the mayor of the district, there was little that Bowser could do in response to Trump’s calling in thousands of members of the National Guard, according to The New York Times.

“Over the past few weeks, we saw further examples of why the District of Columbia’s lack of representation in Congress is so damaging,” House Majority Leader Steny Hoyer said.

“We are the only free nation in the world whose capital doesn’t have voting representation in their parliament.”

D.C. residents have long felt the frustration of not living in a state. The district received only a fraction of funds from the $2.2 trillion stimulus bill in March since it was classified as a territory, according to NPR, despite the outsized toll the coronavirus took on the district and its majority-minority population.

Though D.C. would be the smallest state in the nation, it has a greater population than both Wyoming and Vermont, according to the U.S. Census Bureau.

Currently, D.C. is granted one non-voting delegate to the House of Representatives. That delegate, Eleanor Holmes Norton, originally introduced the legislation that would elevate Washington, District of Columbia to the State of Washington, Douglass Commonwealth in March of 2017. The legislation would also grant the new state two senators and a voting representative.

While residential and commercial areas of the current district would be incorporated into the new state, the White House, Capitol Hill, National Mall, and other government-operated buildings and monuments would remain under federal control.

“Three generations of my family have yet to attain the votes Americans take for granted,” Holmes Norton said when introducing the bill. “Statehood is priceless. Statehood assures that living in the nation’s capital is about pride, not prejudice.”

Mitch McConnell, the majority leader, called the push for D.C. statehood “full-bore socialism” in July 2019. While the bill will likely pass the Democratic House, it is seen as dead-on-arrival in the Republican-controlled Senate.