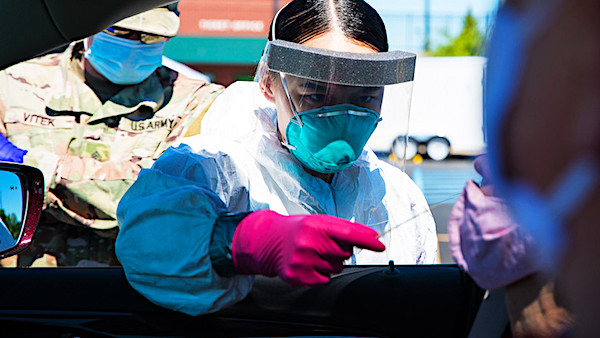 The Michigan National Guard assists the Midland Department of Public Health with drive-thru COVID-19 testing in Midland, Michigan, June 1, 2020. As of May, more than 1,000 Michigan Guard soldiers and airmen had actively supported the state's COVID-19 response at the request of state and local agencies. (Michigan National Guard photo by 2nd Lt. Ashley Goodwin)

The pandemic put a spotlight on Democratic governors across the country, and in the press, the likes of Andrew Cuomo, Gavin Newsom and Gretchen Whitmer were painted as courageous leaders guided only by science in their fight against the coronavirus.

It was quite the contrast to their GOP counterparts and to President Trump, whose dizzying and occasionally contradictory advice was panned as anti-science and conspiratorial.

It did not sit well with Republicans on the House Oversight Committee led by Ranking Member Steve Scalise. While the administration was accused of bungling a public health crisis, they say Democratic governors were making decisions that ended in thousands of needless deaths in nursing homes.

In a letter to Cuomo on Monday, they wrote:

“We write seeking information, at a granular level, about the science and information used to inform your decision to mandate nursing homes and long-term care facilities admit untested and contagious COVID-19 patients from hospitals.”

“This decision,” they conclude, “likely contributed to the thousands of elderly deaths in New York State.”

Four similar letters were separately written to Newsom in California and Whitmer in Michigan, as well as Govs. Phil Murphy in New Jersey and Tom Wolf of Pennsylvania. All were first obtained by RealClearPolitics. Each is blunt.

Scalise notes that the Center for Medicare and Medicaid Services issued guidance on March 13 insisting that states allow new patients infected with the virus only if those facilities could follow Centers for Disease Control quarantine guidance. Because the elderly are at higher risk of contracting the virus, as the letters note, CMS Administrator Seema Verma warned that “under no circumstances should a hospital discharge a patient to a nursing home that is not prepared to take care of those patient’s needs.”

In a now deleted directive issued by the New York Department of Health, the state mandated that “no resident shall be denied re-admission or admission to the [nursing home] solely based on a confirmed or suspected diagnosis of COVID-19.”

“For clarity,” Scalise writes, “this advisory mandated nursing homes accept known COVID-19-positive patients and, further, mandated that nursing homes not even test patients for COVID-19 prior to admission.”

New York posted that directive on March 25, more than a week after CMS warned of the danger. The Pennsylvania Department of Health had mandated earlier on March 18 that nursing homes “must continue to accept new admissions and receive readmissions for current residents who have been discharged from the hospital.”

California did the same, mandating on March 30 that a patient’s COVID-19 status could not be used to bar admission to a nursing home. New Jersey issued a similar order on March 31.

Gov. Whitmer signed an executive order mandating that nursing homes “must not prohibit admission or readmission of a resident based on COVID-19 testing requirements or result.” She signed it on April 15. It has not been rescinded.

The elderly are already at higher risk of succumbing to the disease because of underlying health conditions and compromised immune systems. Elderly in nursing homes and long-term care facilities are at even greater risk because the virus sweeps through congested areas with ease and with deadly results. According to a New York Times database, at least 28,100 nursing home residents and workers have succumbed to the illness, a grim number that accounts for one-third of all U.S. COVID-19 deaths.

Cuomo has not escaped criticism for his decision to fill nursing homes with coronavirus patients.

“What New York did was to follow what the Republican administration said to do. Don’t criticize the state for following the president’s policies,” he said on May 23.  And anyone who wants to point blame at him for the death toll, he said, “should ask President Trump. I think that will stop the conversation.”

It has not, however, stopped the discussion. Scalise accused Cuomo and the other governors of issuing “death sentences” to seniors.

“The decision of several governors to ignore CDC protocols and mandate COVID-positive patients go back to their nursing homes ended up being a death sentence for some of our country’s most vulnerable citizens,” the Louisiana Republican said in a statement to RCP.

Rep. Mark Green, a Florida Republican and practicing physician, pronounced the death toll a dereliction of duty. “The governors of these states must provide details about their decisions to send contagious COVID-19 patients into nursing homes,” he told RCP. “The American people, and their loved ones, deserve answers.”