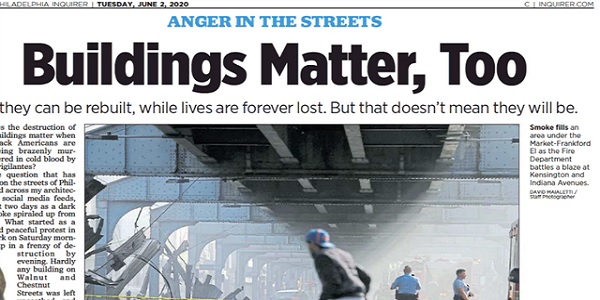 Employees of The Philadelphia Inquirer skipped work Thursday in protest of a column headlined “Buildings Matter, Too” in Wednesday’s newspaper.

As of 9 a.m. Thursday, 44 members of the newspaper’s staff had called into work “sick and tired” in response to an article written by Inga Saffron, the paper’s architecture critic, decrying the destruction of buildings and property around Philadelphia.

The original headline was “Buildings Matter, Too” an apparent reference to “Black Lives Matter” which has been the rallying cry of activists since the 2013 shooting of Trayvon Martin.

Protests have been occurring in cities across the country for several days in response to the death of George Floyd. Floyd died May 25 while in Minneapolis police custody after an officer kneeled on his neck for more than 8 minutes, video of the incident showed. Some of the protests have become violent.

The Inquirer staff wrote an open letter to the newspaper’s leadership Thursday demanding change. “We’re tired of shouldering the burden of dragging this 200-year-old institution kicking and screaming into a more equitable age” the letter said.

Features reporter Brandon Bell was one of dozens of Inquirer employees to join in the protest, tweeting his support for the move: “Things need to change. We call on The Inquirer to do better. To be better.”

Today, I’m joining my colleagues of color at the @PhillyInquirer and calling in sick and tired.

Things need to change. We call on The Inquirer to do better. To be better.

Here is the open letter we sent our newsroom leadership yesterday:https://t.co/zWavZdCXgV pic.twitter.com/Epp9fZKDnJ

The Inquirer, which is the largest paper in Philadelphia, changed the headline of the controversial story and added an editor’s note saying the story was “inappropriate and we should not have printed it.”

“We need to do better,” the editor’s note said.

The editors of the paper also published a separate story apologizing for the headline Wednesday night.

The incident is similar to situation at The New York Times, which published an op-ed written by Republican Sen. Tom Cotton of Arkansas Wednesday. Journalists at the Times denounced the decision to publish Cotton’s piece.

A senior staff editor went as far as to tweet that the piece puts black staff at the Times “in danger.”