The name Jussie Smollett has become a verb, used to refer to incidents where the left pretends there was a racist hate crime when there wasn't. Now there is a Facebook group set up to create these incidents.

They just did it to me. I'm not that well-known, or as those who came after me characterize it, "You're a nobody, no one cares enough about you to bother doing this." But that doesn't mean anything; as we already know, they try to get relatively unknown conservatives fired from their jobs all the time now.

It all started when I complained to a good friend of mine on the left about how sick and tired I am of being called a white supremacist simply because I'm a conservative. It's especially irritating considering my last boyfriend was black. This friend responded and said it was racist of me to point out that I had a black boyfriend! Shocked, I posted a rant about the exchange on Facebook. I may as well have had a boyfriend from the KKK; the left's reaction would have been the same.

One of my Facebook friends, a lefty atheist from my state who I've been friends with on Facebook for years, left a rude comment. After that, people I am not friends with on Facebook – but who were coincidentally friends with him – started leaving a photoshopped screenshot of my Facebook page everywhere on my account. The doctored image had me saying "F*** Black Lives Matters!" repeatedly, and the profile photo was a badge that said "Support Law Enforcement," something I've never had as a profile photo. The comments they left were horrific; I had to report most of them to Facebook for profanity and threats, and block them.

A friend of mine told me she'd heard about the doctored image from a friend who was a member of a new group that had just popped up called "Expose Your Local Racist." These people viciously attacked me for days. They made it very clear: A conservative is not allowed to date outside of their race because it destroys the left's false mantra that we're all white supremacists. They were going to make me pay by faking that I was a racist. If they can't catch a conservative saying something racist, then they expand the definition of what racism is. If they still can't get you on that, they photoshop words into your mouth to falsely make you look like a racist.

The Facebook group is full of attempts to destroy people and get them fired from their jobs. Many of them appear photoshopped like what they did to me. One of their admins admits that they've been exposed for bullying and harassing and that people are trying to get Facebook to shut them down. There are over 18,000 members in the group, so when they target someone, it is a lot of hate. There is a new post every few minutes, and several times a day they go over doxxing details of someone to get people fired from their job and triumphantly report their success. While some of these people they've targeted may have really done racist things, how many have they falsely smeared, like me?

Unfortunately for them, they picked the wrong person to destroy as a pretend racist. I hold myself out on Facebook as an evangelical Christian. I started the website Intellectual Conservative in 2002. I have never uttered a profane word on Facebook, and I've been on it since 2008. In fact, my former lead writer for Intellectual Conservative in the early 2000s quit writing for me because he kept dropping profanity in his articles, and my younger brother, who edited our articles back then, got tired of editing them out. 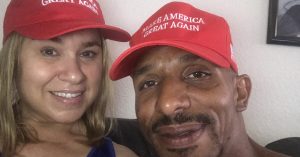 A few of the more reasonable people who came onto my Facebook page to accost me for allegedly being a racist were willing to listen to my response and ended up changing their minds about me. It probably helped that they saw many photos of me with my ex-boyfriend. But for the ones who hate me because I'm a conservative, I'm sure this photo of my ex and me wearing MAGA hats (right) just made them madder. The irony is my ex is descended from a freed slave. But they don't care about that; he's a non-person to them because he's black and conservative. They want to pretend he doesn't exist, and they will destroy me in order to shut me up about his existence. I wrote an article about what it's like being in an interracial relationship two years ago. Do I sound like someone who hates blacks?

Two of the radical activists actually admitted it was a photoshop job. One said I had been "catfished." Another one ridiculed me for thinking the image was me, posting an image of the profanity coming from a different woman with my same name.

Eerily, I wrote about this same exact thing happening to another conservative woman back in 2014. The left photoshopped her Facebook page to make it look like she had said racist things while working at a credit union. She wasn't even working for the credit union anymore, but her current employer fired her over the incident. Sadly, my article exposing the incident wasn't enough to save her job.

So far I've had no luck getting Facebook to get rid of the manipulated image. Since it's not an actual profile, there's no one to report. But I'm sure they can find out who first added the image to Facebook, and they can certainly go back and look at my profile – including things I've deleted – to demonstrate that I never posted those rude statements.

The lesson here is the left will destroy you with photoshopped screenshots if you are on the right and don't fit their nasty racist stereotype of a conservative. Sorry, lefties, you will never force me to date only within my own race.

Rachel Alexander
Rachel Alexander is a senior editor at The Stream. She is a political columnist and the founder and editor of Intellectual Conservative. Alexander is a regular contributor to Townhall and The Christian Post. She was ranked by Right Wing News as one of the 50 Best Conservative Columnists from 2011-2017 and is a recipient of Americans for Prosperity's RightOnline Activist of the Year award.
So what's next for QAnon?
Our presidential election was disturbingly similar to Uganda's
Did Trump incite insurrection?
No changes to everyday life under Biden? Riiiight
Mr. President, pardon Jon Woods, a victim of 'process crimes'
See more...