With recent election cycles giving way to rapid increases in negative partisanship and social animosity, according to Pew Research Center, political battle lines are being drawn tighter than ever before in the United States -- and the window for a third-party presidential run just seems to be growing thinner.

According to 2020 Libertarian Party presidential nominee Jo Jorgensen, however, now may be just the time for third-party players to make their case to a "fed-up" American electorate.

The political appetite for an "outsider" is strong, Jorgensen told The Western Journal in a telephone interview last week. Craving a such a candidate, the American public chose billionaire real estate mogul Donald Trump for the presidency in 2016, largely as a referendum on the Washington establishment.

Many voted for Trump in hopes that he would put an end to D.C. drudgery by balancing the budget, curtailing military interventionism overseas and shrinking the scope of government.

In the eyes of many conservatives, Trump has come through on his campaign promises, with 85 percent of Republicans approving of his job performance in recent Gallup polling.

But according to Jorgensen, the results have been lackluster. The reason? She says America had been looking for its outsider in all the wrong places.

"Trump was seen as an outsider, and one of the reasons that the polls got it wrong was that they didn't poll people who either had never voted or hadn't voted in 20 years because they were so fed up with the system," Jorgensen said.

"Their attitude was, 'We're fed up, we want something different.' And so, they voted for Trump and he was supposed to come in and balance the budget, get rid of the deficit and give us smaller government. And just like every other Republican, he's given us bigger government." 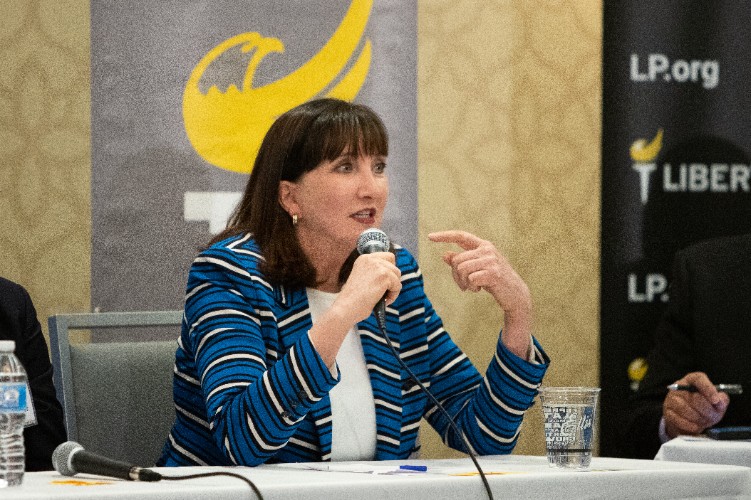 Jo Jorgensen received was nominated May 23 in the Libertarian Party's first ever virtual convention. (Courtesy of Jo Jorgensen for President 2020)

A "Life Member" of the Libertarian Party, according to her official campaign website, Jorgensen has been something of a political outsider since 1980, when she cast her first Libertarian presidential ballot for Ed Clark.

Her first personal foray into politics was a 1992 run for South Carolina's 4th Congressional district. Despite falling to Republican Bob Inglis, the young third-party candidate still managed to make waves on the congressional debate stage, and was referred to by local media as "a rose between two thorns."

In 1996, the recognition paid dividends as Jorgensen elevated herself to the party's vice presidential nomination, campaigning in 38 states with Harry Browne at the top of the ticket.

The candidate has not ventured far from the private sector throughout her career, however, running two software-related companies and founding a business consulting start-up in 2002. She also holds a doctorate in Industrial/Organizational Psychology from Clemson University.

Jorgensen's May 23 nomination -- she earned 51 percent of the 1,026-delegate vote -- officially made her the Libertarian Party's first ever female presidential candidate.

Prior to Jorgensen's nomination, former Republican New Mexico Gov. Gary Johnson had twice in a row topped the Libertarian ticket, first in 2012 and again in 2016, pulling a record share of the national popular vote for a Libertarian candidate in the most recent presidential election with more than 4 million votes (3.3 percent).

The result signaled potential electoral traction for the party, which has historically struggled to break above 1 percent in the popular vote and has long been believed by partisans and centrists alike to be radical or unpalatable due to its socially liberal values or support for mass decentralization of the federal government.

Jorgensen pushed back against such perceptions in her interview with The Western Journal, indicating a small-government platform was no more radical than that of a politician seeking to raise taxes or expand the scope of the state.

"What I think a radical candidate is, is taking over half your money and then spending it on stuff you don't want, spending it on tanks and favoring ... special interests," Jorgensen said. "How about letting people keep their money, and then they get to spend it where they want?"

"They get to choose who is doing a good enough job to earn their business, not the government, because once you have the government bureaucrats, then it goes to their friends and special interests and lobbyists, and that's not where the money should go," she added.

Pulling Votes or Playing to Principle?

Some of Jorgensen's principle policy proposals include balancing the federal budget, turning the U.S. an "armed and neutral" nation on the world stage, eliminating the Department of Education, cutting taxes at every level and providing a system in which the American people have the opportunity to "opt out" of Social Security.

The candidate remains confident this platform will do her well, resonating with the average American.

Fears, however, continue to persist within the Libertarian Party that the electorate will continue to avoid voting third party in an effort to retain votes for the major party of their choice and keep opposing partisans out of office.

The Western Journal's Joe Setyon contributed to this report.

Andrew J. Sciascia, The Western Journal
Biden's handling of cyber breaches spirals out of control
Gymnast who famously won gold for U.S. on injured ankle speaks out on Simone Biles
'Jeopardy!' contestant sets record for all the wrong reasons
Police discover an entire Texas hotel has been rented out for COVID-positive immigrants
Gavin Newsom pulls his kids out of summer camp for stupid reason
See more...