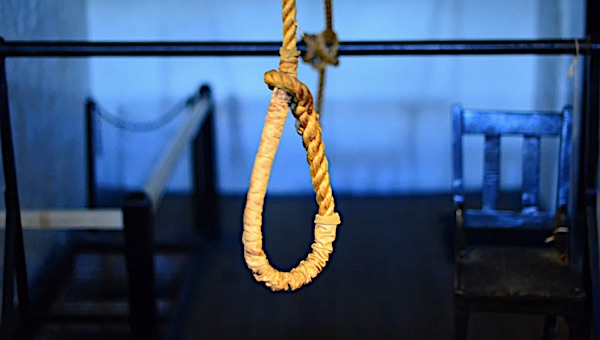 The false alarm about the “noose” in NASCAR driver Bubba Wallace’s garage followed is one of several recent incidents where a widely reported hate crime accusation involving a noose crumbled under scrutiny.

Here are five recent examples of public outrage about a noose turning out to be either a false alarm or an outright hoax.

The FBI announced Monday that it was investigating a noose found in Wallace’s garage at Talladega Superspeedway.

Celebrities and sports stars flocked to support Wallace following news of the supposed noose, and the hashtag “#IStandWithBubba” trended on Twitter. Wallace said on Tuesday that he was offended by those who suggested the incident could be a hoax.

“It offends me that people would go to those measures but again, I’m not shocked,” Wallace said. “People are entitled to their own opinions to make them feel good and help them sleep at night.”

“But it is still an ongoing investigation with the FBI,” he added. “I can now say I have talked to the FBI, never thought that would happen.”

The FBI and DOJ said later Tuesday that there was no noose in Wallace’s garage but instead a “garage door pull rope fashioned like a noose” that had been there since 2019. No federal crime was committed, the FBI said.

Wallace doubled down on the incident Tuesday night, insisting that he had experienced an act of racism.

“I’ve been racing all of my life. We’ve raced out of hundreds of garages that never had garage pulls like that … It’s a straight up noose,” Wallace told CNN’s Don Lemon.

He later said Wednesday that he is “relieved” that the FBI found that he wasn’t the victim of a hate crime.”I want to say how relieved that this wasn’t what we feared it was,” the driver said in an Instagram post. “I want to thank my team, NASCAR and the FBI for acting swiftly and treating this as a real threat.”

Democratic Oakland Mayor Libby Schaaf launched a hate crime investigation in June into alleged nooses found in a local park. “Symbols of racial violence have no place in Oakland and will not be tolerated,” she said.

Following her remarks, a black resident named Victor Sengbe told WKYT that he had set up the ropes as part of an exercise course.

Several nooses found on trees around Lake Merritt were removed and will be investigated as hate crimes. pic.twitter.com/JW8TvY6pi4

“Out of the dozen and hundreds and thousands of people that walked by, no one has thought that it looked anywhere close to a noose. Folks have used it for exercise. It was really a fun addition to the park that we tried to create,” Sengbe told WKYT, adding, “It’s unfortunate that a genuine gesture of just wanting to have a good time got misinterpreted into something so heinous.”

“Intentions don’t matter when it comes to terrorizing the public,” Schaaf said following Senge’s explanation. “It is incumbent on all of us to know the actual history of racial violence, of terrorism, that a noose represents and that we as a city must remove these terrorizing symbols from the public view.”

Oakland Parks and Recreation director Nicholas Williams also said that “the symbolism of the rope hanging in the tree is malicious regardless of intent. It’s evil, and it symbolizes hatred.”

Black ‘Empire’ actor Jussie Smollett sparked national outrage in 2019 when he claimed he was a victim of a hate crime and had been attacked near his home in Chicago.

Smollett told police that two men had yelled racist and homophobic slurs at him, told him he was in “MAGA country,” threw a rope around his neck and poured a bleach-like substance on him.

An investigation by the Chicago police found that Smollett paid two Nigerian brothers, Ambimbola and Olabinjio Osundairo, $3,500 to stage a fake attack in order to gain fame from the incident, the Associated Press reported.

A female student at Michigan State University said in October 2017 that she had found a noose on the handle of the door in a residence hall.

“A student reported a noose was hung outside of her room,” president of Michigan State University, Lou Anna Simon, said in a statement. “I want to recognize the courage it took for the student to report this incident.”

“This type of behavior is not tolerated on our campus,” Simon added. “No Spartan should ever feel targeted based on their race, or other ways in which they identify. A noose is a symbol of intimidation and threat that has a horrendous history in America.”

Police found that the alleged “noose” was not in, fact, a noose, but a shoelace.

“The matching packaged shoelace was found outside of the residence hall,” university spokesman Jason Cody said in a statement. “Officers located and spoke to the student who lost both of the shoelaces, which are packaged in a way that someone could perceive them to look similar to a noose.”

“Also, the original shoelace found inside the residence hall was not directed at any individual,” Cody added. “It originally was seen on hallway floor and later on a stairwell door handle, where officers believe someone put it after picking it up.”

In April 2016, officials at Salisbury University confirmed that two black students had drawn a stick figure hanging from a noose with a racial slur and the hashtag #WhitePower on a whiteboard in the school’s library, according to Delmarva Now. The Salisbury University Police Department investigated the drawing as a hate crime, before finding out who the culprits were.

The university cited the Family Educational Rights and Privacy Act in defense of not citing the names of the students, the publication reports, and police determined not to file criminal charges after consulting with the Wicomico County State’s Attorney’s Office.

“Regardless of who created the drawing, we find such actions demeaning to all members of the campus community and against our core values,” said Dane Foust, vice president of student affairs, in a statement to Delmarva Now.