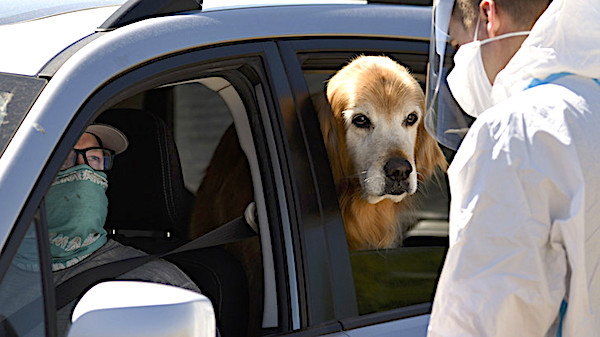 A worker talks to a motorist at a COVID-19 testing site in Marquette County, Michigan, where the Michigan National Guard is partnering with other state and local agencies to assist residents, June 13, 2020. (Air National Guard photo by Master Sgt. David Eichaker)

The media is churning out countless alarmist stories each day about the threat of COVID-19 and the dangers of societal reopening. "Risk of new lockdown rises with fear of second COVID-19 wave," writes Reuters, as one example of the genre.

These stories generally incite, rather than inform. They cherry-pick facts and lack context. Only when the COVID picture is viewed in perspective are people able to make wise decisions about their actions. It should be safe for society to continue broadly reopening while directing resources to specific at-risk populations, such as nursing homes and prisons, which are more vulnerable.

The media has focused on increasing numbers of positive tests and hospitalizations in parts of the country to imply reopening is reckless. "Confirmed coronavirus cases have risen by double-digit percentages in 16 U.S. states that have gradually loosened restrictions since Memorial Day,” says Marketwatch.

Yet this perspective omits several essential facts. First, testing capacity has dramatically increased. The U.S. has tested 3.4 million people over the last week -- about 40% more than the weekly numbers one month ago. It's no surprise that positive cases have increased in some areas along with testing, especially since numerous antibody studies suggest that the disease is far more widespread than initially thought. We are witnessing a new infectious disease, and these case count ebbs and flows are to be expected.

In a country as vast and varied as the U.S., there will likely be COVID hotspots somewhere. Yet focusing on these in national news gives the impression that the country, or even individual states, are in far more danger than in reality. Even with a significant increase in testing, the number of new positive tests nationally has remained flattened as society has reopened.

Topline case counts overlook where outbreaks are occurring. Nearly half of COVID deaths have occurred in nursing homes and assisted-living facilities. A sizeable portion of Arizona cases has occurred on Indian reservations. We’d prefer that at-risk populations didn’t bear the brunt of this disease, but these vulnerable groups tell us nothing about the relative safety of reopening Main Street. By lacking this context in their stories, the media is distorting with statistics.

Numerous news outlets are featuring rising COVID hospitalizations in some states to indicate a second wave. Admittedly, hospital admissions are a more objective measure of disease severity than positive tests. Often left unsaid, however, is that hospitalizations are falling in most states. Wouldn’t it be more helpful to cite these statistics in context?

Even in the states with rising hospitalizations, media stories about percentage increases often exaggerate the threat when increases occur from low baseline figures. For instance, numerous stories highlight how Arkansas’s COVID hospital admissions have increased by 121% since Memorial Day. Sounds bad, until you look at the raw numbers, which reveal that this increase only amounts to 111 patients.

Likely for political reasons, the media has identified Florida as the leading edge of a second wave. "Floridians flattened the COVID curve. Then, amid upbeat talk, the numbers began to rise," reads a Miami Herald headline. Yet the data shows that new positive cases in Florida have tracked the increase in testing. Over the last month, hospitalizations have increased by about 50%, or just over 4,300 patients (in a state of 22 million people). Yet, the number of daily COVID deaths in the state has fallen considerably, by about one-third from May 10, using a seven-day rolling average.

This rise and fall in cases, hospitalizations, and deaths is precisely what one expects with a new infectious disease as we learn more and adjust. It’s part of "the dance" that we all knew was coming after the curve was flattened. It shouldn't be used to justify pausing societal reopening, so long as appropriate precautions are encouraged and taken.

Reopening remains a success, with the positive case rate flattened, hospitalizations falling in most of the country, and deaths significantly reduced. That's the positive story that the media should tell. Even if it won't get as many clicks.