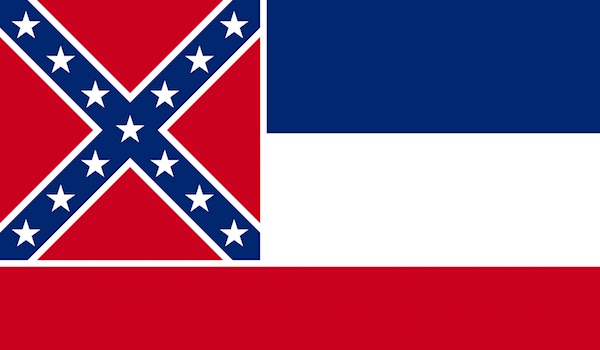 Lawmakers in Mississippi have begun drafting legislation to remove the Confederate battle emblem embossed on their state flag, according to Mississippi Today.

Mississippi, the last state to showcase the Civil-War era symbol on its flag, began drafting the legislation behind closed doors after a crowd of about 3,000 protesters flooded the capital, where protesters chanted “Change the flag!,” according to a report from Mississippi Today.

Protests in Mississippi and around the country have sprung up following the death of George Floyd who has become a figure for perceived racial inequality since he died in Minneapolis police custody after an officer knelt on his neck for more than 8 minutes.

If legislators are successful is changing the flag, the Stennis flag, which has been in place since the late 1800s could take it’s place. A Twitter page exists to advocate solely for this change, and it displays the replacement flag sought by some in the Southern state.

Lawmakers tried but failed to remove the current state flag in 2001 after a majority of people in the state voted in a referendum to keep the state symbol, according to the Mississippi Clarion Ledger.

Demonstrators across the nation have been targeting historic monuments in major cities, particularly Confederate monuments. Rioters tore down a confederate statue over the weekend in Virginia, and Democratic Gov. Ralph Northam pledged to remove a controversial statue of Robert E. Lee, Fox News reports.

Should Mississippi change its state to remove the Confederate symbol?
4% (1 Votes)
96% (22 Votes)