Missouri may be the first state in which the COVID-19 lockdown figures to be a central, if not the central, issue in a gubernatorial election.

Republican Missouri Gov. Mike Parson is particularly vulnerable to a primary challenge for the simple reason he was never elected governor. As lieutenant governor, he assumed the office after Gov. Eric Greitens was forced out as a result of an unfortunate dalliance that blew up in his face.

An Air Force veteran, attorney and mother of five, McDowell won the Republican primary for state auditor in 2018 and drew 45% of the vote in the general despite being hugely outspent by incumbent Nicole Galloway. Galloway was being groomed to top the ticket in 2020.

By national standards, Missouri's lockdown was relatively sane, but that is not saying much. Late to the game, and under pressure from Galloway and the state media, Parson launched a plan called "Stay at Home Missouri" on April 3.

"Now more than ever, we must all make sacrifices," Parson said when he announced it.

McDowell was very specific in her criticism. "This attempt to circumscribe and limit other principal rights is unacceptable without substantive and procedural due process."

She added, "The governor failed to show a compelling state interest. The risk to public health was exaggerated and unsubstantiated." She was right.

As a Kansas City, Missouri, resident, I had been protesting these stay-at-home orders since the City of Kansas City initiated its own orders in mid-March. At that time, only four people had died in Kansas and Missouri combined.

In the 10 counties surrounding Lake of Ozarks, whose uninhibited pool party shocked the nation last month, the total death count remains at two.

In Kansas City – a city of roughly 500,000 people – there have been only 28 deaths. The city remains, however, in some absurd semi-lockdown until July 5 with, of course, a major exception made for protesters and rioters. 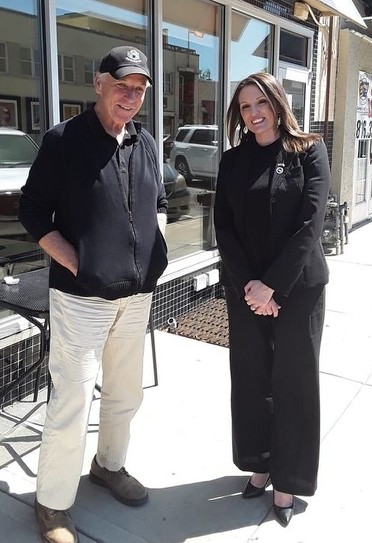 On April 30, in mid-lockdown, I met McDowell for the first time to get her take on the lockdowns. She arrived un-masked with a hulking security guy named "Crash," also unmasked. I took both as positive signs.

Fortunately, Panera's left a table outside so we would have someplace to meet. I had a picture of us taken standing next to each other and had it posted on my Facebook page.

In that I do not "unfriend" real friends or relatives, even annoying ones, over political issues, several Karens, of course, criticized us for not standing six feet apart or wearing masks.

Parson has not helped his cause by being less than consistent or forthcoming on the state's COVID-19 policy. The Kansas City Star recently ran an article headlined, "Missouri Gov. Mike Parson was for a coronavirus shutdown before he was against it."

"In fact, Parson has tried to split the difference on multiple occasions during the coronavirus crisis," write the editors, accurately enough. "The governors in Iowa and the other states made the wrong decision to stay open, but at least they made a decision. Parson wants to have it both ways."

At this point, McDowell remains a long shot. What makes the Aug. 4 primary worth watching is that it could be the nation's first referendum on a state's handling of COVID-19.

In November, the state media will say whatever they need to say to make Galloway's position on COVID-19 look like the right one. In August, however, Republican voters will get to make up their own minds with minimum media interference.

Jack Cashill
Jack Cashill has a Ph.D. from Purdue University in American studies. His lastest book is "Unmasking Obama."
The 10 nominees for 2022 Cultural MVP
Climate change stuns Rushdie attacker, Hadi Matar
Liz Cheney goes full Orwell in Epps defense
How Wordle got me through the 2022 election
Have we earned the right to be American?
See more...