In an interview Sunday on "The Michael Brooks Show," Chomsky was asked to explain what Trump is doing "institutionally" that is "unique," Breitbart reported. 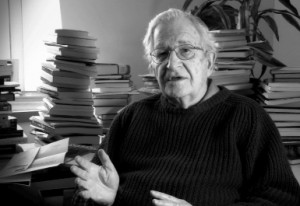 "This sounds strong, but it's true: Trump is the worst criminal in human history, undeniably," said Chomsky, 91, who has been dubbed "the father of modern linguistics."

"There has never been a figure in political history who was so passionately dedicated to destroying the projects for organized human life on earth in the near future," he said.

"That is not an exaggeration."

In his prolific career, Chomsky is known as a linguist, philosopher, cognitive scientist, historian, social critic and political activist. He holds a joint appointment as institute professor emeritus at the Massachusetts Institute of Technology and laureate professor at the University of Arizona.

"People are focused now on the protests; the pandemic is serious enough that we will emerge from it at terrible cost," he said. "The cost is greatly amplified by the gangster in the White House, who has killed tens of thousands of Americans, making this the worst place in the world."

Sounding an even more dire note, Chomsky said the world won't "emerge from another crime that Trump has committed, the heating of the globe."

"The worst of it is coming — we’re not going to emerge from that," he said.

The ice sheets are melting; they're not going to recover. That leads to an exponential increase in global warming," he said.

"Arctic glaciers, for example, could flood the world. Recent studies indicate that on the present course, in about 50 years, much of the habitable part of the world will be unlivable."

He claimed people won’t be able to live in parts of South Asia the Middle East and the United States.

"We’re approaching the point of 125,000 years ago, when sea levels were about 25 feet higher than they are now. And it’s worse than that," he said.

The Scripps Oceanographic Institute, Chomsky said, recently published a study estimating the world is coming "ominously close to a point [similar to] 3 million years ago, when sea levels were 50 to 80 feet higher than they are today."

"All around the world, countries are trying to do something about it," he said. "But there is one country which is led by a president who wants to escalate the crisis, to race toward the abyss, to maximize the use of fossil fuels, including the most dangerous of them, and to dismantle the regulatory apparatus that limits their impact.

"There is no crime like this in human history. Nothing. This is a unique individual," he said of Trump.

"And it’s not as if he doesn’t know what he’s doing. Of course, he does. It’s as if he doesn’t care. If he can pour more profits into his pockets and the pockets of his rich constituency tomorrow, who cares if the world disappears in a couple of generations?"

The author of more than 100 books on topics such as linguistics, war, politics and mass media, Chomsky is said to align ideologically with anarcho-syndicalism and libertarian socialism.