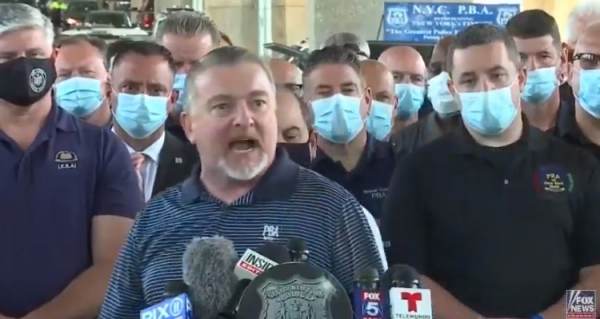 Charging that police have been "left out of the conversation" over race and law enforcement in the wake of the death of George Floyd, the visibly angry head of a New York police union accused the media and state legislators of "vilifying" police "like animals and thugs" even though the 375 million police interactions nationwide each year are "overwhelmingly positive."

"We all read in the paper all week that in the black community, mothers are worried about their children getting home from school without being killed by a cop. What world are we living in? That does not happen! It does not happen," said Michael O'Meara, the head of New York State's Police Benevolent Association, at a press conference in New York City.

"I am not Derek Chauvin, they are not him," O'Meara said of the officer who has been charged with second degree murder in the death of the 46-year-old Minneapolis black man. "He killed someone. We didn't."

He said police officers "roundly reject" what Chauvin did as "disgusting."

O'Meara said nobody is talking about the police officers who have been killed in the last week.

He said "our legislators have abandoned us" and "the press is vilifying us."

"Well you know what guys?" O'Meara said, looking back at the officers gathered behind him. "I'm proud to be a cop. And I'm going to continue to be proud to be a cop, until the day I retire."

"Everybody’s trying to shame us into being embarrassed of our profession. You know what? This [badge] isn't stained by someone in Minneapolis. It’s still got a shine on it, and so do theirs," he said.

"Stop treating us like animals and thugs, and start treating us with some respect! That’s what we’re here today to say," said O'Meara.

An August 2019 study in the Proceedings of the National Academy of Sciences, for example, found "no significant evidence of antiblack disparity in the likelihood of being fatally shot by police," Manhattan Institute scholar Heather Mac Donald noted in a Wall Street Journal column Tuesday. In 2015, under President Obama and Attorney General Eric Holder, a Justice Department analysis of the Philadelphia Police Department found white police officers were less likely than black or Hispanic officers to shoot unarmed black suspects. In 2016, the Washington Post reported a Washington State University study finding that police officers are three times less likely to shoot unarmed black suspects than unarmed white suspects.

The press conference followed the charging of Buffalo police officers Robert McCabe and Aaron Torgalski with second-degree assault Saturday after video showed 75-year-old Martin Gugino suffering a head injury in an interaction with them.

The suspension of the two officers prompted 57 officers from Buffalo's riot unit to resign in protest.

"Stop treating us like animals and thugs and start treating us with some respect ... Our legislators abandoned us. The press is vilifying us. It's disgusting." pic.twitter.com/CXOPARKff7