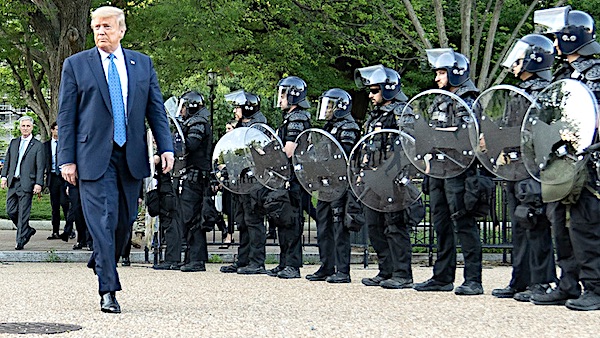 President Donald J. Trump walks from the White House Monday evening, June 1, 2020, to St. John's Episcopal Church, known as the church of Presidents, that was damaged by fire during demonstrations in nearby LaFayette Square Sunday evening. (Official White House photo by Shealah Craighead)

The conventional wisdom is that the racial turmoil of the past two weeks is damaging President Trump's support among blacks, but the latest Rasmussen poll of likely voters shows a remarkable 41% of blacks approve of his performance.

In the 2016 election, Trump won only 8% of the black vote, a typical figure for Republican candidates.

While some might view the survey by the "conservative" Rasmussen as an outlier, its finding in December of 34% approval among blacks was affirmed by an Emerson College poll that had it at 35%. And a  Marist poll at the time found 33% of non-white voters in approval of the president.

Meanwhile, polls on Trump's handling of the protests and the underlying racial issues from Emerson, CBS News Reuters/Ipsos and Monmouth University found most Americans disapprove.

Emerson, which conducted its poll after the controversial clearing of protesters before Trump's appearance at St. John's Episcopal Church on Monday, found 36% approve, 47% disapprove and 17% were neutral or had no opinion.

Tim Scott: 'Unprecedented in my lifetime'

Black Republican Sen. Tim Scott of South Carolina praised Trump's work for the black community in an interview Tuesday, saying "the last three years of progress have been unprecedented in my lifetime."

"If we have that conversation, there will be a clear delineation about progress that has been made on behalf of of the most vulnerable communities in this country under President Trump, and some of the challenges that were inspired and enacted by Vice President Biden," he said. "So that would be a clear contrast and one that would be worthy of actual investment of time, energy to hear that debate."

Meanwhile, one of Biden’s key black supporters, Rep. James Clyburn – credited with rescuing the former VP's flailing campaign by endorsing him in South Carolina – said Tuesday he "cringed" at Biden's assertion a week ago that black voters "have a problem figuring out whether you’re for me or Trump, then you ain’t black."

Among Trump's accomplishments for blacks, Scott said, are permanent funding for historically black colleges and universities and the creation of 7 million jobs, two-thirds of which went to minorities and to women.

"We had an increase the labor force participation rate among African-Americans," Scott said. "Home ownership, I believe, was up by two points under this administration. Access to a quality education improved, help for sickle cell anemia secured under this president, so when you look at the actual accomplishments – put aside all of the vitriol, all of the rhetoric, all of the things that some may find distasteful – the actual policy positions have been incredibly concrete.

"And I would say this has been the best policy position of a president in my lifetime, and that's what I know from just personal experience and having watched this for the last 30 years of my life."

How does that translate to votes?

An analysis by the Washington Examiner in November showed Trump's dramatic rise in job approval among blacks could make the difference in the 2020 election.