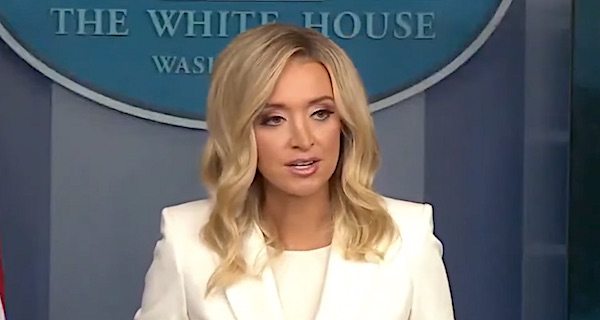 McEnany discussed the “Defund the Police” movement at a White House press conference Monday afternoon where she criticized “sitting congresswomen,” including “Biden advisor AOC,” for “wanting to defund our police across this country.”

Ocasio-Cortez responded by suggesting that McEnany’s comment was “mired in racist history” and demanding an apology. Ocasio-Cortez accused the press secretary of erasing the fact that she’s a congresswoman.

.@PressSec wouldn’t be the first person to mistake a women of color for having a lower position or title than she does, but Kayleigh – in case you haven’t picked up a newspaper in two years, I’m a Congresswoman. https://t.co/3FRHo7dpTL

“The @PressSec comment is steeped in a long, hurtful, & horrendous history of stripping women of color of titles and diminishing them to ‘the help,'” Ocasio-Cortez added. “Perhaps she isn’t aware that what she did is mired in racist history. If that is the case, I look forward to her apology tomorrow.”

McEnany tweeted back at Ocasio-Cortez, “Read the transcript, Congresswoman,” with a screenshot of her own comments that highlighted the word “congresswomen.”

White House director of strategic communications Alyssa Farah also emphasized to Ocasio-Cortez that McEnany did, in fact, note that Ocasio-Cortez is a congresswoman.

Verbatim quote by @PressSec: “POTUS is appalled by the ‘defund police’ movement. The fact that you have SITTING CONGRESSWOMEN wanting to defund the police—notably Rashida Tlaib, notably Biden advisor @AOC …” https://t.co/HH8bUxK3zF