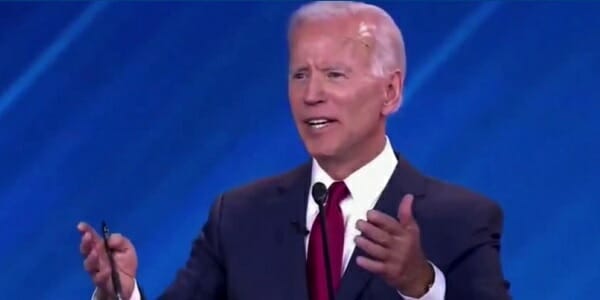 The intense and careening 2020 news cycle is reshuffling the prospects of the top contenders to become Joe Biden’s running mate so quickly that the shifting headlines have become a blur.

Just before Memorial Day weekend, Sen. Kamala Harris seemed best positioned to get the nod after Biden was forced to apologize for scolding African American voters that “if you have a problem figuring whether you’re for me or Trump, then you ain’t black.”

Three days later, George Floyd, a black security guard, died while pleading for relief from a white Minneapolis police officer whose knee was pressed against his neck. The death occurred just as many areas of the country were beginning to tentatively reopen after months of COVID-19 lockdowns. Now the nation is caught in the throes of one of the fiercest race conflicts in decades as clashes between protesters and police have erupted across the country and looters and arson threaten many small businesses already struggling to survive.

Back in early May, before the Secret Service was rushing President Trump to an underground bunker as protesters threatened the White House perimeter, a column in RealClearPolitics labeled Harris “the do no harm choice for VP.” It’s an opinion that may have drawn eye-rolls from conservatives but at the time reflected the growing consensus on the left that the former California attorney general was one of the few candidates attracting a cross-section of liberal and some mainstream Democrats while not alienating the donor class.

After the past week’s racial unrest, however, Harris’ law enforcement background — as a prosecutor who put people behind bars for marijuana crimes and threatened to jail parents of truants — is hamstringing her. The same can be said for Rep. Val Demings, a black two-term congresswoman who previously served as the first female police chief of Orlando and represents a key region, the Interstate 4 corridor, in the critical swing state of Florida. Her husband is Orange County Mayor Jerry Demings, who previously served as sheriff.

Although a relative newcomer to the national political scene, Demings earned plaudits on the left for her performance as one of seven impeachment managers late last fall. But her years running the Orlando police, which has a history of criticism for using excessive force, is now under the microscope and could take her out of contention amid the current racial turmoil.

Demings on Friday didn’t hesitate to blame President Trump for further inciting violence following Floyd’s death rather than trying to bring the country together to heal. She was referring to the Friday tweet in which Trump said he would send in the military to quell the violence in Minneapolis and used the charged phrase “when the looting starts, the shooting starts.”

“America is on fire right now and the president of the United States is walking around with gasoline,” she tweeted. “We need healing. We need empathy. We need justice.”

In such a quickly shifting news environment, some longtime Democratic political operatives are warning against any hasty conclusions on the VP front by ruling in or out any prospective Biden running mates before the presumptive nominee makes his selection, which he’s said will take place in early August.

“Vice president selections are made in the moment and reflect the presidential candidates’ strengths and weaknesses at that specific point in time,” said Erik Smith, a veteran Democratic operative who served as a senior adviser for message development on the Obama 2012 campaign.

“Let’s see where we are in two months,” he told RealClearPolitics. “We are in a dynamic time. I don’t think three months ago anyone would have thought a global pandemic would have shut down the country.”

Still, it would be politically tone-deaf not to acknowledge that the last few news cycles have been the toughest on Sen. Amy Klobuchar’s veepstakes chances. The senior senator from the battleground state of Minnesota was among the first of Biden’s 2020 rivals to endorse him just before his big Super Tuesday win, and she is the most moderate and politically compatible with Biden of all the women in the running.

After the former vice president committed to naming a woman as a running mate, Klobuchar was undoubtedly in the top tier of contenders – until Biden’s “you ain’t black” blunder in a radio interview led many to conclude that a black woman candidate would have an edge.

Ten days later, with parts of Minneapolis and St. Paul literally smoldering in the wake of Floyd’s death, choosing a white home-state senator who also served as a prosecutor in Minnesota’s most populous county is now simply untenable, according to several prominent Biden allies in the black community.

Klobuchar had a tough-on-crime record, and during her presidential campaign faced protests from black leaders in Minnesota after news reports aired criticism about her controversial murder prosecution of a black teenager named Myon Burrell. Klobuchar has said that the case should be reviewed, and recently sent a letter to the local prosecutor’s office asking for an independent probe, but civil rights leaders have pressed her to demand a completely new investigation.

Critics also are renewing questions about her failure to bring charges against several police officers during her time as county attorney. Derek Chauvin, the fired policeman who killed Floyd, was investigated in 2006 for a fatal shooting while Klobuchar was working as a local prosecutor, although she left that job before a grand jury was convened in the case.

“I don’t know what else to say about it [other than] it is a lie” that she declined to prosecute Chauvin, Klobuchar said Friday.

“That investigation continued into a time when I was sworn into the U.S. Senate,” she continued. “I never declined the case. It was handled and sent to the grand jury by my successor.” The grand jury decided not to charge Chauvin or the other officers involved in the shooting with any wrongdoing.

Despite the scrutiny, some influential voices in the Biden camp still view Klobuchar as the way to win over most swing voters, including suburban women and older voters who some polls show are moving away from Trump and toward Biden amid the coronavirus pandemic.

“She’s our best bet to get disaffected, white, blue-collar Democrats who voted for Trump in 2016 back into the Democratic column,” former Pennsylvania Gov. Ed Rendell told the New York Times late last week. “She’d be the biggest help to Joe.”

But Rep. Jim Clyburn, the powerful South Carolina Democrat and former chair of the Congressional Black Caucus, said Friday that the timing is terrible for Klobuchar even though he respects her and believes she is qualified to be vice president.

“We are all victims sometimes of timing and some of us benefit tremendously from timing,” Clyburn told reporters. “This is very tough timing for Amy Klobuchar.”

Clyburn, whose support for Biden helped propel him to victory in the pivotal South Carolina primary, has been lobbying hard for him to pick a black woman against others pushing for Klobuchar and more liberal factions pressing him to select Elizabeth Warren.

Amid the unrest, Clyburn, for one, is still backing Demings and Harris and says their law enforcement backgrounds should not be disqualifying but viewed in the historical context of when they served.

Several other black women are also in the VP mix and they lack the law-enforcement baggage of Harris and Demings. Former Georgia state Rep. Stacey Abrams has been actively campaigning for the job for months while Susan Rice, President Obama’s controversial national security adviser, is among the names regularly circulating in the media.

For some black activists, a candidate’s commitment to racial justice, not their skin color, is what matters most. Just days before Floyd’s death roiled the country, a Morning Consult poll found that Warren would give Biden the biggest boost as his running mate. Roughly 26% of those surveyed said placing the Massachusetts senator on the ticket would make them more likely to vote for Biden while 23% said it would make them less likely to do so.

Black Lives Matter movement co-founder Alicia Garza backed Warren in the presidential primary because she had the most “robust black agenda.”

Garza is now pressing for a candidate without a law enforcement background.

“It will be a hard row to hoe for black voters, as my grandmother used to say, especially in this moment when there’s so much tension between law enforcement and black communities and policing of black communities,” Garza told Politico over the weekend.

WND News Services
These reports are produced by another news agency, and the editors of WND believe you'll find it of interest.
Watch: Olympic coach gets freaky when his swimmer beats American champ
4th-graders get told to hide 'equity survey' from their parents
Biden's U.N. adviser met with group 'co-opting' Americans to push China's 'preferred policies'
S&P 500 ekes out another record as investors gear up for big earnings
Are Democrats about to lose this U.S. Senate seat?
See more...