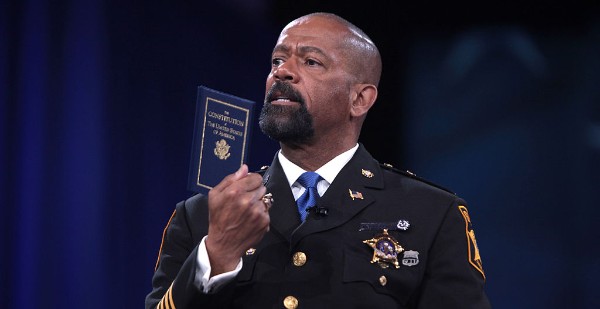 Defunding police is yet another proposed solution based on a false narrative that will only make life worse for blacks in America, contends the former, four-time elected sheriff of multi-racial Milwaukee County.

"The biggest losers in all this will be poor black people in crime-ridden ghettos. The police are the only thing standing between them and violent criminal predators," said David Clarke in an interview Monday with WND.

"You'd have to loathe black people to do that to them."

Clarke, 63, said the proposal advocated by the Black Lives Matter movement, which has quickly gained traction among Democratic leaders in cities such as Los Angeles, New York and Minneapolis, "isn’t a serious public policy proposal, it's buffoonery."

Since the death of George Floyd on Memorial Day in universally condemned actions by Minneapolis police officers, a majority of the city's council members have pledged to dismantle the police department. Leaders in other cities propose shifting funds from law enforcement to social programs intended to reduce crime.

"Police departments are already underfunded," Clarke said. "Why not just turn policing into a 9 to 5, Monday through Friday operation? That is all they’ll have money for."

'They carried my dad's authority'

Clarke rejects the assumption at the heart of the defund-police movement of "systemic racism" in American law enforcement while acknowledging there are bad cops.

"They won't push back. But the police are not the problem."

He contends "racialist" black leaders such as Al Sharpton are largely ignoring the devastating impact of the $22 trillion spent on welfare and poverty programs over the past 50 years that have had the unintended effect of fostering fatherless homes, with 75% of blacks born out of wedlock.

"The first thing we need to do is a self-examination of our black community. Leave white men out of this for now," he said.

"Look at the cultural dysfunction, the growing underclass, the ineffective parenting, the fatherless homes, the school failure, dropping out of school early, joining gangs, drug and alcohol abuse, teenagers having kids," he said.

Clarke acknowledged he was "blessed" to grow up in a two-parent household. He was reared by a veteran of combat in Korea and a mother who "provided the love as a stay-at-home mom for most of our young life."

"My dad instilled a sense of discipline in me, and he taught me to respect authority, and it started with him," Clarke said.

"He was my first authority figure."

His father extended that authority to teachers and the parents down the street.

"They carried my dad's authority when I was in the outside world," said Clarke. "They knew, 'All we've got to do if we're having problems is get a hold of Mr. Clarke.'"

David Clarke Sr., now 89, was an airborne Army Ranger during the Korean war who served in a segregated unit.

The mostly intact black families of that generation "are the black people who had a beef," the younger Clarke observed.

"They had a gripe, facing Jim Crow laws, facing other systemic racism in the country," he said.

Nevertheless, his father didn't express to his children any ill feelings.

Clarke said the world is "unfair" today not because of racism but "because of the human condition."

Clarke began his law-enforcement career in 1978 with the Milwaukee Police Department. He was a patrol officer for 11 years and then a homicide detective. He became a lieutenant in 1993 and a captain in 1999.

He won election four times as sheriff of Milwaukee County, Wisconsin, from 2002 to 2017.  A speaker at the 2016 Republican National Convention, he later joined the super PAC America First Action as a spokesman and senior advisor, serving until February 2019. He now focuses on his consulting business, America’s Sheriff LLC, and speaks nationwide, mostly to Republican and law-enforcement groups.

Clarke called the actions of Minneapolis police officer Derek Chauvin in the death of George Floyd "abhorrent" and "bad tactics" but an "anomaly," noting statistics compiled by the Washington Post and studies such as one reported by the Post showing officers are three times less likely to shoot unarmed black suspects than unarmed white suspects.

"We're going to burn the United States and call for huge policy changes from an anomaly?" he asked.

In contrast, he pointed out, over the last three weekends in Chicago alone, 175 black people were shot by other black people, leaving 42 dead.

"Where is the outrage? Where is Black Lives Matter?"

Clarke said there is "too much groupthink" in the black community, quashing critical, independent thought and debate.

"I say, 'Look, I have an alternative view. I'm from a different school of thought. I promote a clash of ideas, let's have it.'"

Clarke said he's a voracious reader who has been influenced by the writing of black scholars such as Thomas Sowell.

"I've met those guys and sat down for hours picking their brains," he said.

"Those are the people I admire. That is the kind of person I want to be, a critical thinker."