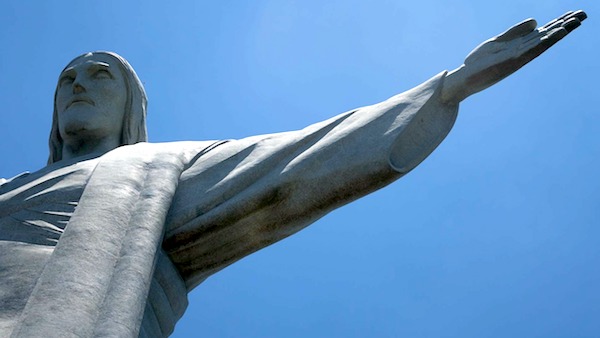 A New York statue of Teddy Roosevelt is on the chopping block.

A statue of George Washington was vandalized.

Now one conservative leader is forecasting that statues of Jesus "are next."

PJMedia reported that in "the wake of a new Cancel Culture iconoclasm, with Black Lives Matter and Antifa activists toppling statues left and right, Matt Schlapp, chair of the American Conservative Union that runs the Conservative Political Action Conference, warned that statues of Jesus would be next."

The report continued, "While some leftists laughed at the idea, claiming that Jesus was one of them, others asked Schlapp to point out a few publicly funded statues of Jesus, for … no reason, just asking."

Statues of Jesus are next. It won't end. Pray for the USA

He wrote on Twitter: "Statues of Jesus are next. It won't end. Pray for the USA."

"That's ridiculous. Wasn't Jesus a person of color brutalized by an oppressive colonial regime? Jesus is a symbol of victims of violence, not of authoritarians who erect statues," he said.

That's ridiculous. Wasn't Jesus a person of color brutalized by an oppressive colonial regime? Jesus is a symbol of victims of violence, not of authoritarians who erect statues. https://t.co/PMTEFnEGLT

PJMedia, however, noted: "Yet the new Cancel Culture iconoclasts have not limited their ire to symbols of 'authoritarians.' While the statue-topplers may have started with Confederates like Robert E. Lee, they quickly moved on to Christopher Columbus, George Washington, and Thomas Jefferson. On Friday, vandals targeted statues of Ulysses S. Grant (who proved instrumental to defeating the Confederacy and ending slavery in the U.S.), Francis Scott Key (writer of 'The Star-Spangled Banner'), St. Junipero Serra (the leader of Spanish missions in California), and Miguel de Cervantes (author of Don Quixote)."

The report continued, "It gets worse, however. Vandals targeted Mahatma Gandhi, leader of the Indian independence movement. They even spray-painted Black Lives Matter slogans on the Robert Gould Shaw 54th Regiment monument, which celebrates the first all-volunteer black regiment of the Union Army during the Civil War."

PJMedia said: "Sure, Jesus may be the savior of the world, and at the very least He altered the course of history by encouraging people to care for the downtrodden and love their neighbors as themselves. Jesus likely wasn't 'white,' but the black Union volunteers weren't exactly pale of skin, either. But no matter, a statue's a statue, and 'Black Lives Matter.'"

In fact, Black Lives Matter activist Shaun King called Monday for the removal of statues, murals and stained-glass windows that depict Jesus as a "white European," believing them to be "a form of white supremacy."

Yes, I think the statues of the white European they claim is Jesus should also come down.

They are a form of white supremacy.

In the Bible, when the family of Jesus wanted to hide, and blend in, guess where they went?

"If you blame your problems on a statue of someone who has been dead over a century, then you only have yourself to blame," he said.